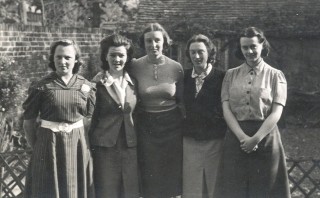 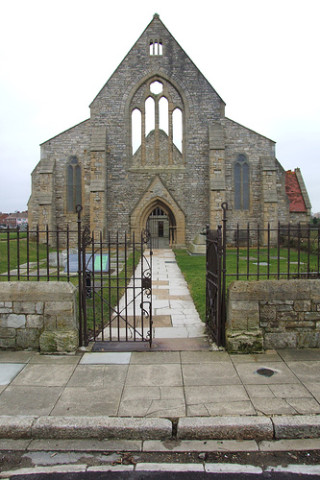 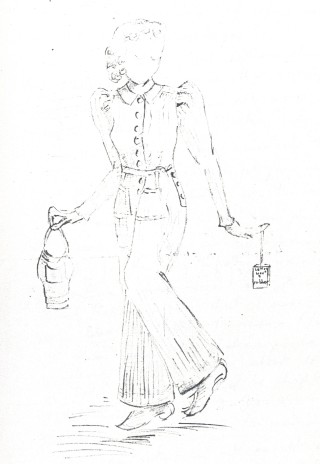 Olive's sketch of her 'siren suit'

To listen to the audio clip, click play on the bar below the photo of Olive on the right.

I am exceedingly excited about going back [to college]. Mother and I have spent the morning buying all those little odd things that are so necessary and so easily forgotten. We also bought a soft mattress affair, water proof backed which Mother thinks will be a useful article for me when its use for shelters is no longer necessary – “to take in your car picnicking” she says.  I also bought a smart siren suit – you’d love it I know. It’s of corded velveteen and is a rich blue in colour. I’m just dying to show it off to you. Anyway, it appals me to think I had to pay 27/11 just for shelter wear!

The routine here, regarding lectures is most odd. Every time a warning goes we leave the college and come into the shelters in hostel. This has happened four times this morning. It is most disturbing and I guess other arrangements will be made eventually…….. We are not allowed in our rooms during the morning as the maids are cleaning them out. How different from Homerton where the rooms were cleaned once a week and then only flicked over…… The dining arrangements are so much pleasanter too. We have a lecturer or two at each table, who serves; and the crockery is charming and is above all things CLEAN…… So life here is a little more normal. The only irritating things are that one has to prepare for bed at about 6.30.

Did I tell you that college is trying to arrange tea dances to which men of the Royal Marines are to be invited? Of course we are all most frightfully thrilled, especially as the guests are rumoured to be officers only – the ranks not being fit company for such elite as us. And they call the modern army democratic! I don’t think the idea will catch on much, for when the weekend arrives one is thankful to get away from college. It might work as a ‘marriage bureau’ as it were…

You will be surprised to learn, as were many of us, that a certain section of girls, on account of Saturday night’s little raid, are leaving! Well, we are glad to get rid of them and their grumbles, but we are disgusted by their lack of will power and guts. Why, there are thousand of people all over this country who are in far more dangerous positions than we are, who are far harder worked and are having no holidays, and yet, do they shirk just because a bomb drops near them? One could understand it if Portsmouth had had [such] comparable to London, but the truth is she hasn’t. To be quite honest I don’t want to go home to London ‘cos I’m scared – really and truly frightened. Anyway, such people as they are not wanted.

I have just finished sweeping out glass from my room and covering my now open window panes with cardboard. Last night as you probably know Haw Haw threatens to wipe out Portsmouth. Well he had a go but he far from succeeded. At six o’clock the siren that we had been waiting for went off. At eight a stick of six bombs fell right round our college. One fell a very short distance from the south end of the hostel, three fell in the tiny park opposite, one in the avenue opposite college and another further down the road. The ‘All Clear’ went at 12 o’clock ….. My room looks a trifle darker now with cardboard panes but that doesn’t hurt much. I regret to say that a more unfortunate occurrence took place. Two of our girls who were trying to get back to college were caught by the blast and were killed. They were first years too.