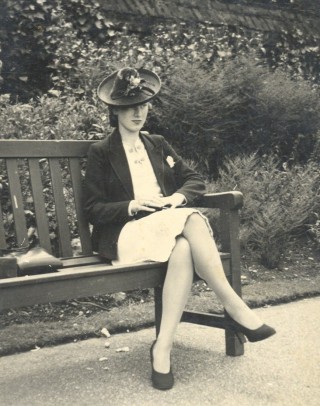 To listen to the audio clip, click play on the bar below the photo of Olive on the right

I received both your letters yesterday afternoon and I broached the subject to Father. He is quite willing my darling to let me come home for a week to see you, but I’m afraid that there is going to be a little difficulty somewhere. Mother says that she can’t possibly look after you. You see she finds it the most terrific hard work and worry to find food for ourselves and I was a very heavy burden on her this holiday. It isn’t that food is expensive, but that it is well nigh unobtainable. I’ve known her to be out for two or three hours shopping and then come back with practically nothing!

As you probably read in the papers this morning, London had another bad raid last night. Well this time we got it. A land mine landed in Pevensey Road, together with an HE. The road is almost laid flat. Hastings and Bexhill caught it very badly. At the same time a Land Mine was dropped in Limes Avenue. Your house and ours has suffered slight damage. Let me tell you first just what has happened to your house. One pane of glass in the back dining room is out, your back door was forced open and is splintered, broken and buckled. Your front door was also forced open and part of it broken away and is now flapping aimlessly in the breeze. I don’t know yet whether there are any tiles gone. I’m afraid no-one has had any time to see to it because they have had so much of their own to do. All our windows, frames as well were blown in, together with the bathroom window. This all happened about 9.30pm. No-one heard it coming of course, suddenly there was a terrific explosion, the house rocked, plaster fell, soot came pouring down the chimney and glass clattered down. We thought our last hour had come and fell flat on the floor. Then Father shouted “there comes another”; we dived for the table. Mother to the alcove and the house heaved and more soot and glass fell. When we did get up to look at the damage, Mother was nearly in tears to see it. A gas main had been hit in the above mentioned roads and was blazing furiously. Father and Mr Laybourne went out to help – father to rescue and Mr Laybourne to help with First Aid.  They came in up to their eyes in mud and debris and horrified by what they had seen. Most of Father’s friends live in these roads, people we know quite well and so the casualty lists meant more to us. Mr Laybourne and I rushed over to your place to inspect the damage and collect your camera and clothes – they would soon have been looted with such free access to your house…….  However, don’t worry about it too much. It could have been far, far worse. We’re just thankful to be alive and with at least one decent room to live in.

Fancy springing this rationing on us like that! I do think they might have given us a slight hint. You see, people haven’t been bothering to lay in a stock of clothes – they have preferred to bank the money and draw out for the clothes when they were needed. Now no-one is reasonably equipped for summer outfits – one doesn’t start to buy until June-July. But I think the greatest blow is the rationing of corsets and bras. Not that this will affect me much, but to some poor women they are an absolute necessity and I think that it is an extremely bad policy to ration either of these goods. They are almost an essential to some as crutches to a cripple and no-one would think of denying cripples these …..

66 coupons won’t buy a complete winter outfit let alone underclothes and summer clothes! We shall have to start putting last year’s top on the year before’s bottom or else convert the drawing room curtains and cushion covers. By the time the war has finished my fur coat will be no more than a hide!

You know, you men are lucky. All our pleasures are being taken from us –our make-up, our perfume, our clothes and silk stockings, even our figure moulders, hair pins. In fact they will soon be asking us for our hair – everything that makes a woman’s life worth living. I shall begin to feel bitter again. Fancy having to brave the winter with no stockings – brrrr!

I went out Xmas shopping this afternoon. What a farce! And this is the honest truth. I went into Boots and taking a deep breath said “Have you any soap, bath cubes, bath salts, talcum powder, cream, powder, perfume?” This was the result of repeated attempts in other chemists where I had received the answer “no” to all requests. The answer was the same in this case, only it required just one “no” instead of seven. In the end I followed someone else’s example and just said in a hopeless tone “Have you anything interesting?”

…… I only earn £180 a year, £52 of which I pay Mother (so I can hardly expect to gather in a fortune) and £17 of which goes towards my 5-years debt and God knows now much goes towards income tax and other weird societies. I might as well just give up the ghost.