A personal account from the front line by Leslie Couzens, 6th June-3rd July 1944 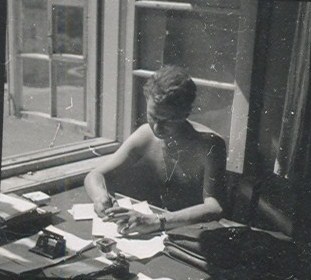 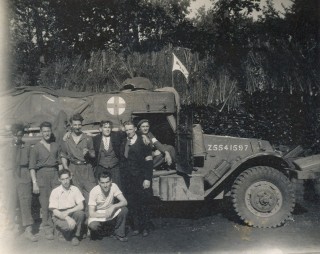 The chaps of the Rifle Brigade with their truck 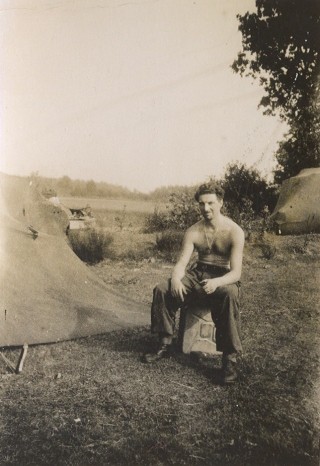 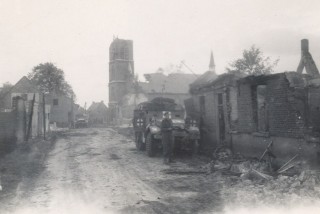 I am writing this on board ship so that I can post it at the first opportunity on the other side. There is of course very little I can tell you and possibly some of what I do say will be censored but I’ll do my best.

So far we have had calm seas and the ship has less motion than a bus, also we have had no trouble from Jerry, either in the form of planes, subs, E Boats or shelling. However we’re still in sight of England which somehow gives one a feeling of security.

I expect we shall be up and doing fairly early tomorrow morning so I will say goodnight now. PS Have now landed in France!

We are still having a comfortable time – feeding well etc. The main work being digging. Of course there are a hundred and one little things to be done such as cooking, washing clothes, fetching water, cleaning guns etc. etc. which keep us fully occupied most of the day.

I don’t seem to have any fresh news to tell you. All the most interesting things of course I can’t tell you, which leaves only the small personal incidents. One chap on my truck was to have been married yesterday so of course he had his leg pulled unmercifully yesterday. This sounds rather unkind but it’s the usual thing in the army and strangely enough makes ones misfortunes more easy to bear. It turns things into a joke when sympathy would add coals to the fire of ones regrets and sorrow.

I expect you have seen articles in the papers and accounts on the wireless on how we live, eat, sleep, wash etc; what food we get and what comforts we have in the way of cigarettes. They certainly give some idea of our life, but are sometimes misleading. For example one radio report said that by now we had probably had a bath. I don’t know what most people visualised but a bath consists of standing naked in a field on a piece of a ration box and having a sponge down with a couple of pints of cold water. Not so bad on a warm sunny day, but when the wind blows you feel very naked indeed.

Things are still going along fairly nicely. We have of course had a few sticky moments which to new comers like us are a bit nerve shattering at first but not so bad when one gets a bit used to it. It’s difficult to explain but I expect your father will understand. Anyway I’m rather proud to be able to say that everyone on my trench had the courage to say they were scared. Probably over next to nothing. However we’ve got over that now to a large extent.

At the moment it is difficult to assess the opinions of the French as we don’t have much contact with them – most of the villages in the forward areas being evacuated. I’m afraid I’m not able to tell you the truth about snipers except to say that a lot of what was in the papers earlier on seemed to me to be the result of jumping to the wrong conclusions. Possibly a more accurate report has been published by now.

I can at least say that there has been a lot of welcome from the French and I have seen no open hostility, which is gratifying considering that the Germans just moved in quietly whereas the British have blown their villages and towns to pieces.

Now to be a little more domestic. Things have been a bit quieter the last few days and we have been able to make up a lot of lost sleep, which was badly needed: in four days I had eight hours sleep. However I don’t suppose the Jerries had as much as that!