A personal account from the front line by Leslie Couzens, 18-29th October 1944 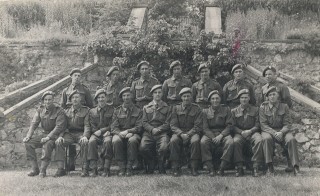 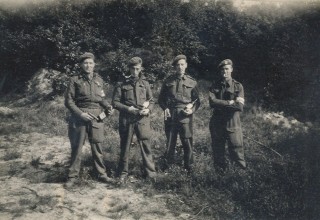 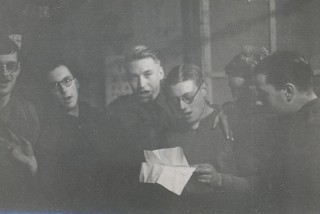 I received your letter of the 14th this morning and was surprised to receive so soon your good news. I am so glad it was over so quickly and that you are both doing so well……. I’m afraid that at the moment circumstances are not very favourable for coherent thought or correspondence. However I hope to be able to write a fuller letter in a few days time and possibly by then I shall have had more news from you.

I was right out of English cigarettes a few days ago and was reduced to smoking German ones, German cigars and a pipe. German cigarettes are all poor quality Turkish. German cigars are rolled with tobacco leaves and brown paper in alternate layers! This is the literal truth – I’ve unrolled one and examined it! Incidentally I have a lovely morocco leather cigar case presented to me by a wounded Jerry.

We had quite an interesting morning. We had ‘stonked’ some Jerries the night before and the majority had walked in to give themselves up and left their wounded behind (they would!). When we advanced the next morning we found them where they had been laying all night. We saw one first and having dressed him, he told us that there was another 100 meters away. We found him and were taking both to a nearby farm to await an ambulance when we heard cries coming from a plantation of peas trained on sticks. We couldn’t see anything and it might easily have been a trap – so as I had my greatcoat on over my red cross armband, I picked up a Jerry’ Tommy gun’ which was lying in the field and went in to look for them with it. We found three more wounded. Then we found another out in another field and as we were carrying him in, we saw yet another asleep in a shed. As we were taking no chances, out came a Jerry automatic before we investigated him. The poor bloke on the stretcher not having seen the other Jerry in the shed did not realise the import of this and when he saw us produce the Jerry automatic, thought his last minute had come!

At the moment we are in the cellar of a farmhouse and are reasonably comfortable. A few days ago we were in a disused silo, to which we had added a roof of planks, earth, straw, earth and bricks which we hoped would suffice to detonate any direct hits from shells or mortars without undue damage to us below. The silo still had a slight residual smell but nothing to worry about. We carpeted the floor with straw which proved a great attraction for refugee frogs and field mice. The occupants of our present abode have cleared out and left their cattle behind. So we feed the cows and pigs. The cows we milk and for dinner today we had roast chicken, with sage and onion stuffing and fresh cabbage. This afternoon we boiled a couple of beetroots and had them for tea. Tomorrow we have curly Kale on the menu (and maybe sucking pig!).

We are still living in our cellar and are quite comfortable.  Having found a large tin bath we have managed to heat up enough water for quite a good bath each. It was necessary to keep a stick handy in the ‘bathroom’ as the pigs kept poking their snouts through the holes in the wooden partition which separated us from their sty!  However, despite the inconveniences, it was very welcome to be able to clean up and put on clean clothes. We have been issued with our winter woollens so are well equipped for when the weather turns really cold. There is an autumn chill in the air now but it has not been very cold yet.