Auxiliary Hospitals in WW1 in Hertfordshire 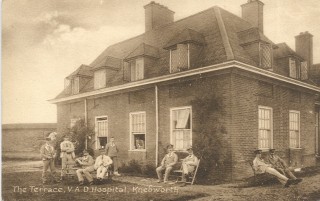 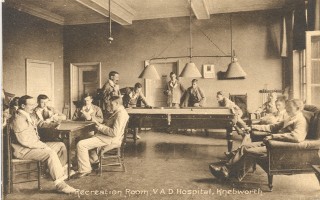 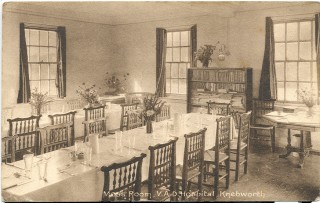 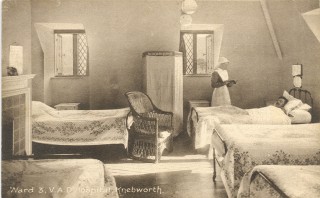 The need for hospitals increased as the war progressed, which resulted in the opening of auxiliary hospitals to provide nursing and convalescent care. Hertfordshire had some 40 such hospitals. A full list can be found at www.redcross.org.uk/WW1.

Some were church halls, such as Ewen Hall and St James Hall in Barnet; others were private houses; and in Knebworth it was the golf club which became a Voluntary Aid Detachment (VAD) hospital. The honorary dispenser to the hospital was Mr G C Owen of Bangor House, Welwyn, and the Hertfordshire Mercury for 31 August 1918 reported on the wedding of his eldest daughter, who had been attached to the hospital since it opened. The bride and groom were met by wounded soldiers with crossed sticks as they left the church, and the nurses and ward maids were recorded as having subscribed to a valuable present.

More information on a local hospital can be found in the report on the Rosemary Hospital at 28 Milton Road, Harpenden, in 1917 on the Harpenden History website http://www.harpenden-history.org.uk/page_id_244.aspx.

In Hatfield Lord Salisbury gave Northcotts, originally for wounded soldiers but later re-fitted and opened as a VAD hospital in June 1916. At St Paul’s Walden Bury the nursery wing of the Strathmores’ home was also used by soldiers who were convalescing, cared for by Red Cross nurses.

One hospital with an intriguing name was the Federated Malay States hospital at Blackmore End in Kimpton. This was the home of the Baxendale family. Two members of the family were working in what we now know as Malaysia and they encouraged subscriptions from the ex-pat community.

Digswell House in Welwyn was another with overseas connections. It was the home of Colonel and Mrs Acland and was used as a convalescent home with 24 beds for Australian soldiers. By 1918 the need for men in the armed services was such that William Hope, aged 44, an employee there, was called up for military service. His appeal to the Local Tribunal was supported by Mrs Acland. It was noted that she had given her house, her time and her means for the good of the nation. Mr Hope was the only man employed there – he was a builder and had lost one eye. The tribunal awarded conditional exemption until 31 October 1918.