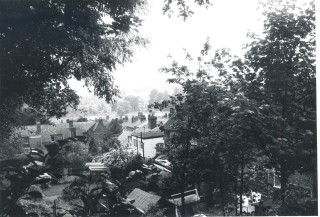 Arthur Hudson Dixon was born in 1883 in Hertford, and was still living there in the 1911 census, at 29 Byde Street, with his parents Hudson and Mary Dixon and his younger sister Grace. He was single at that point, and he’s described as a “Painter, Grainer, Sign Writer”. His father, Hudson Dixon, is referred to in the report below; the impression given is that he disagreed with his son’s stance but respected it.

Although Arthur was exempted from combatant duty only, I can find no record that he was enlisted in a non-combatant role. He’s almost certainly the Arthur H. Dixon who died in Hertford in 1940, aged 58.

Mr. Dixon, father of one of the appellants, said he, as an old soldier, did not see matters in quite the same light as his son, but for the last fifteen years he had had very strong convictions on the question of war…

The above three appellants {Waterman, Caton & Burton} had been granted exemption from combatant service only. The fourth, A. H. Dixon, had been refused exemption entirely. He had stated he would not paint an ambulance wagon nor assistant in the R.A.M.C. He thought the Army and Navy unnecessary.

Mr. Graveson emphasised that the tribunal had power to give absolute exemption.

The Rev. R. Dunkerley, of Colchester, said he thought from the questions it was not sufficiently realised that appellants were acting from what they believed to be a high sense of duty, though they respected those whose idea of duty had driven them into the Army.

After a private consideration, the Tribunal decided to refuse the appeals for absolute exemption of the first three appellants, and in the case of Dixon they revised the local tribunal’s decision to one of exemption from combatant duty only. The Chairman said the Tribunal appreciated the offer to engage in work of national importance. They heard much of agriculture requiring labour and they suggested Mr. Crauford [representing the Board of Agriculture] should communicate with the Board of Agriculture suggesting that they make use of these men.