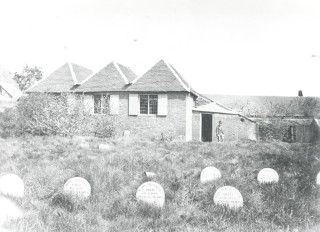 Basil Grigg Burton was born in Barkway in 1896, son of Johnson (or possibly Joshua) Burton and his wife Fanny Louisa. In the 1911 census, the 14-year-old Basil is listed as an institutional pupil at the Saffron Walden Union Workhouse, and by March 1916 he’s described as a bank clerk from Ware. In the newspaper reports below, he says that he joined the Society of Friends in 1913.

{Burton was appealing alongside A. Waterman, L. H. Caton and A. H. Dixon}

B. G. Burton, replying to Mr. Gratton, said he joined the Society of Friends in 1913 because he was convinced of the principles it held.

Mr. Gratton: You may change your views in two years’ time? – I must act as I think now.

Appellant said he was willing to do anything which he was convinced was of service to the nation and not contrary to the laws of Christ. While he could not go into employment which would relieve a man for military service, if there was work being left undone he would be willing to fill the gap.

The Chairman: Suppose a publican had gone to be a soldier would you fill that gap? – No.

Appellant mentioned that he would not object say to fruit tree pruning, which he learned was needed in one part of the country.

The Chairman: Would you cultivate apples for cider? – I should have to go into the principle involved.

Appellant, in further reply, said as a bank clerk he saw no reason to object to dealing with military banking accounts. The banking system had to go on in this country.

Mr. Gratton: So has the Government.

The Chairman interposed in further cross-examination with the remark to the appellant, “I wish you would go out and fight as well as you can argue.”

The above three appellants {Waterman, Caton and Burton} had been granted exemption from combatant service only… After a private consideration, the Tribunal decided to refuse the appeals for absolute exemption of the first three appellants, and in the case of Dixon they revised the local tribunal’s decision to one of exemption from combatant duty only. The Chairman said he appreciated the offer to engage in work of national importance. They heard much of agriculture requiring labour and they suggested Mr. Crauford {representative of the Board of Agriculture} should communicate with the Board of Agriculture suggesting that they make use of these men.

{This paper cutting is very torn and ragged, and a few words are illegible. “Mr…” in the first paragraph is almost certainly Mr. Graveson, from the context}

The last case was that of a young bank clerk from Ware, B. G. Burton, a conscientious objector, who had already obtained exemption from combatant service, but wanted total exemption. The case had been adjourned for further evidence to be produced by Mr. W. Graveson, who was supporting the young man’s claim, as to whether the Government recognized…{paper torn}…being employed in civilian work as he wanted to be. Mr….{paper torn}…produced a letter from Sir George Newman showing that the Government authorized the Friend’s {sic} Ambulance Unit to find work for conscientious objectors in ambulance and hospital service, but as many of the men would be unsuitable for such work they were now finding other forms of national employment for them.

It was pointed out that if the young man went into civilian employment he would only be entitled to the same pay as if he were in the Army, otherwise it would be unfair to the men who were fighting.

Mr. Graveson said he recognized that, and mentioned that his own son had voluntarily offered his services on these terms six months ago.

The Chairman (to applicant): Supposing they find you some civilian work you don’t like?

Applicant: Well, I should do it.

You would do it in spite of your conscience?

Well, I don’t quite know how far you would go in that way; but even supposing I was asked to be a dustman, I feel that I could do it.

The Chairman: We have had instructions from the Central Tribunal in London giving us guidance in these cases, and I will ask the clerk to put one or two of the questions.

The Clerk: Would you undertake any other work than that to which you felt you were called?

I am a bank clerk and you have suggested farm work; well, I feel I could do any ordinary civilian work like that.

But must you be the sole judge of what you are to do?

Well, in the end it would rest with me.

The Chairman: That is just what we want to know.

Applicant: I saw the representative of the Pelham Committee the other day, and he said they would give me a selection from a list of occupations.

The Clerk: Supposing none of them suited you?

But I think they would.

Major Kinman: The mere fact that these men acknowledge they would be prepared to join the Friends’ Ambulance Unit shows that they are not conscientious objectors, as that unit has to be under military discipline.

Mr. Graveson demurred to this statement and said the Unit had been given a free hand by the Government.

Major Kinman said he could believe a good many things about the Government, but he could not believe that they would give the Friends’ Ambulance Unit a free hand to roam about where they liked; besides, it was contrary to all military laws and even against the terms of the Hague Convention, which stated that no voluntary aid unit was to be recognized unless the members of it were under direct military law and subject to military discipline. If people were allowed to be at large without discipline, all sorts of cranky individuals would want to get to the Front for the novelty of the thing and perhaps to commit some outrage. The thing was impossible.

Mr. Graveson: All I know is that the Government made arrangements with the Friends’ Ambulance Unit by means of which they were not under military discipline.

After deliberating in private the Chairman announced that after giving the case very careful consideration they had decided to dismiss the appeal, which meant that the applicant would have to go into non-combatant service.

Following this appearance before the tribunal, Basil received a letter of support from a Mr Welsford of Waltham Cross. I’ve been unable to find any other reference to him, but it seems that he was either also a Quaker or considering becoming one. It may also be assumed that he was too old to be conscripted, since he appears not to consider the possibility of taking a similar stance himself.

Many thanks for your letter. I had read the report of your case in the Herts. Paper & was wondering what the next step would be. I am so glad you are able to take it all in such a calm & Christlike spirit. I am sure you will have strength given you to bear whatever may befall. For myself, I can’t help seething with indignation at the injustice & crass stupidity of the whole thing.

I think you are taking quite a consistent & logical course in refusing military work of any kind.

If ever we regain liberty of thought & action in this country, it will be to those who are taking your stand we shall owe it. It may be it will give the authorities less trouble if they do not arrest you. I have heard of several cases similar to yours where the people have been just ignored.

Many thanks for the invite for Thursday’s meeting. If I possibly can, I will come over. I went up by the 8.18 the other day & looked for you in the front of the train, but in vain. I expect to be going to the University next week.

Basil Griggs Burton, of Ware, applied to have his appeal on conscientious grounds reheard and the tribunal consented to do so. He had previously been given exemption from combatant service, and he wanted it varied so that he might do work of national importance under the Pelham Committee. – Mr. Bond Holding asked Burton if he would accept the decision of the committee as to what he should do, because up to now he had always reserved to himself the right of accepting or not. – After some hesitation Burton consented to accept the decision of the committee, and the case was adjourned for a fortnight to enable Burton to obtain work under the Pelham Committee.

In the case of Basil G. Burton, bank clerk, Ware, a conscientious objector, who, as reported by us last week, was recently arrested as a deserter and handed over to the military, Mr. Gratton said that Colonel Henderson, chief of the local recruiting authority, was satisfied that it was a bona fide case, and suggested that Burton be given work of national importance under the Pelham Committee.

The Tribunal held that the consent of the Army Council must be obtained before they could consider the case.

The British Army WW1 Service Records list Basil Grigg Burton as listed in the “Non Combatant Corps Warwick”,  suggesting that his refusal to fight was respected, but that he wasn’t granted the right to remain outside military control.

I haven’t found any later records of Basil’s life, such as a notice of marriage, but Basil Grigg Burton is recorded as dying in March 1971 in London.