A World War One poem of conscientious objection 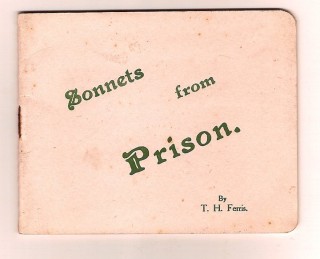 World War One produced a great deal of poetry, from the gung-ho pro-war poems of Rupert Brooke and Julian Grenfell to the more cynical realism of Wilfred Owen and Siegfried Sassoon. All these fought in the War, but there’s little from those who refused to serve on grounds of conscience.

HALS holds a small collection, in files associated with local Quakers, of anti-war poetry, including a booklet called Sonnets from Prison by T. H. Ferris. The booklet was published in Leeds, and it’s not clear whether it’s in the files because the poet was a Hertfordshire man, or whether it was simply owned by local Quakers. He could possibly be the Thomas Henry Ferris who was a 25-year-old living in Croydon in the 1911 census, but this isn’t at all clear.

Most of the poems are generally anti-war, but this one refers to Ferris being in prison for refusing to serve. The author (apparently one Thomas Ferris, described as a “Tolstoyan anarchist”) was sentenced to six months’ hard labour, but it’s not clear what the exact grounds for conviction were. Since the booklet was published no later than 1915, he could hardly have been convicted of refusing conscription, which didn’t come in till 1916. The author was probably the same T. H. Ferris who published Religion and the Crisis: A Sermon for the Times in 1931.

It’s not great poetry, nor even especially good poetry: certainly not of the standard of Owen, Sassoon and Brooke, or even Grenfell. It does, however, passionately express some of the reasons why this man, and many others, took a stand as conscientious objectors.

Not iron doors, nor grated window-bars,
Can cage the human spirit, that obeys
Love’s holy law, and through the eternal ways
Moves with the even motion of the stars.
The clashing key the prison lock that jars,
The blank succession of the nights and days,
Daunt not the soul whose patience yieldeth praise
To Him whose purpose nothing voids, nor mars.
Each day, each week, each month, doth stronger build—
Against stupidity, and pride, and fear,
And all the Christless gang who blood have spill’d—
Such reckoning as shall bring their judgement near.
The days roll on, that all may be fulfill’d:
Give thanks, O heart, the dayspring dawneth clear!

From Sonnets from Prison by T. H. Ferris