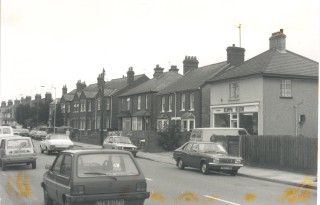 In 1901, the family was living in Pirton, and by 1911, as indicated below, Charles was living with his widowed mother in Hitchin and was a house painter and decorator.

There are no military records for Charles, suggesting that, whether or not he actually joined the Friends Ambulance Corps, he was successful in staying out of military control. In 1932, by which time he’d have been 48, he married Mary E. Gilbert in Romford, and he died in 1969, at the age of 85, back in Hitchin.

Charles Throssell, Bearton-road, Hitchin, appealed for absolute exemption on conscientious grounds. The local tribunal had granted him exemption from combatant service only.

Mr. W. E. Upchurch, from his long acquaintance with appellant, bore testimony to the sincerity of the latter’s conscientious objection. He felt it was absolutely impossible for him to take any service under the military system, but apart from that he was willing to sacrifice his business in order to do work of national importance.

Appellant had a widowed mother dependent on him for personal attendence and there was the likelihood of serious hardship on her.

Mr. G. Passingham appeared in this case also, and said in some of these cases the military representatives might perhaps be wrong in the attitude they took up. They asked, “Do you believe in authority.” This had nothing to do with authority at all. The Act had specially laid down that if a man had a sincere conscientious objection he was entitled to come before the tribunal and ask for exemption. It was given him under the law.

Colonel Woods said Mr. Passingham had implied that the Tribunal was not fair or partial. As far as he knew the took every case on its merits, and he thought they were fair all round. He did not think Mr. Passingham should have said that.

Mr. Passingham: I certainly did not say it against the Hitchin Tribunal.

Col. Woods: You implied it. You said the military representative said they had not power to grant absolute exemption.

The Chairman said they had power to grant absolute exemption at their discretion.

Appellant said he could not undertake military service. It was contrary to the Saviour’s spirit and teaching of reconciliation.

The appeal for absolute exemption failed, but a week’s temporary exemption (nine weeks in all) was granted from non-combatant service.

The Chairman said they did not know how such men were to be used – one possible field was agriculture – but it ought to be thought out by the Government, and a general lead given in the matter.

From a small cutting – date, newspaper and tribunal not known

Charles Throssell, of Hitchin, a conscientious objector, applied for an exemption to go into the Friends’ Ambulance Unit. Mr. Passingham, on his behalf, said there was some misunderstanding in this case. When asked if he would work on the land the appellant said he would do so, but by some mistake he had been given a certificate for non-combatant service.

Exemption was given on the understanding that the man went into the Friends’ Ambulance Unit, for which arrangements had now been made.