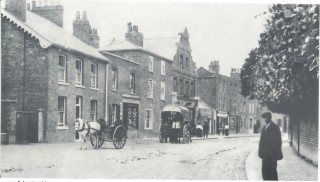 J. D. Weston has proved difficult to track down. No possible candidates were living in Cheshunt during the 1911 census and, while several J. Westons were elsewhere in Hertfordshire and in Enfield, it isn’t possible to be sure if any of these were our man. The description of Weston as a “gardener” could possibly mean he actually worked in the nurseries that were Cheshunt’s biggest employers at the time.

Unless the instruction for him to join the army as a non-combatant was reversed, there should be army records of him. A certain J. Weston is listed as a Royal Engineers reserve, but no background information is given on him.

The first conscientious objector heard was Mr. J. D. Weston, a gardener, living at Cheshunt. He said his conscience would not let him take life as war was contrary to the teaching of the Lord Jesus.

“Supposing you had to act in self-defence, would you allow the enemy to walk over you and trample you down?” he was asked. “I should trust in the Lord,” he replied.

What religion are you? – I belong to the Plymouth Brethren.

And do the Plymouth Brethren hold the same views about war as you do? – Yes.

Mr W. S. Smith, sign-writer, of St. Andrew Street, said he had known the young man for some time and was sure he had a conscientious objection to taking any part in warfare.

The Chairman said it was all very well for Mr. Smith to say what he had, but the Court had been listening carefully to what the appellant had been saying, and so far as he could see he had not said a single thing to convince the Court that he conscientiously objected to warfare.

After further consideration the tribunal exempted Weston from combatant service only, which mean that he will have to join the Army but not carry arms.