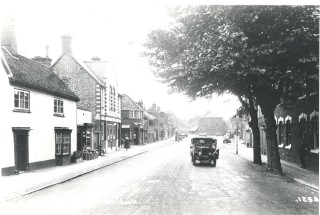 John Herbert Tait was born in 1897 in Tow Law, Co. Durham. There’s something of a mystery about his parentage. In the 1901 census, he’s living with his grandparents, John H. (a watch maker) and Elizabeth Tait, along two of their sons who are both still children and a single daughter, Lucy, who might possibly be John’s mother. By 1911, however, he’s living in Baldock with the widowed Elizabeth, and is described as her son, though it’s difficult to guess what might have prompted the move.

There are no military records for John, suggesting that he was successful in obtaining civilian work, and I can also find no record of marriage or death. Perhaps he moved abroad after the war.

John Herbert Tait 18, single, of no occupation, living at White Horse Street, Baldock, appealed on conscientious grounds, and said he had held these views about a year. He refused to work on a farm where hay had been commandeered for the Army. In answer to questions by members of the tribunal, he said he did not object to killing things, but he objected to taking human life.

Mr. Bond Holding: If the recruiting sergeant came would you resist him? – I would resist by pacific means only. If he forced me along I would go.

The Chairman: Suppose anyone tried to rob you, would you let him? – Yes.

Mr. Bond Holding: Would you allow burglars to come into your house? – The best thing would be not to have anything in the house of value for them to take.

Why? – To remove temptation out of the way of people.

The case was adjourned for a fortnight for appellant to obtain work of national importance, the Chairman suggesting that he might be found occupation in connection with the sanitary work at Letchworth.