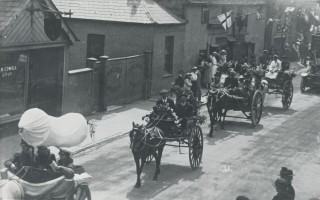 Little information is available about L. H. Caton, other than what is given below. His first name is given in none of the press reports, and the only information available is that he’s from Bishop’s Stortford. A few Catons appear in the immediate vicinity in the 1911 census, but none appears to be this young man, and I also can’t find a record of his birth. Because of this, it’s also not possible to find out what happened to him after the incidents described in the second report.

The father of the appellant Caton [L. H. Caton, Bishop’s Stortford] also testified to his son’s convictions against fighting, held since he was a boy…

L. H. Caton, replying to questions by Mr. Gratton, said as a grocer’s assistant he had no objection to supplying soldiers, but he could not participate in the war.

In reply to the Chairman, who instanced the case of oppression needing to be remedied, appellant said he believed more in the efficacy of prayer than soldiering…

The Rev. R. Dunkerley, of Colchester, said he thought from the questions it was not sufficiently realised that appellants were acting from what they believed to be a high sense of duty, though they respected those whose idea of duty had driven them into the Army.

After a private consideration, the Tribunal decided to refuse the appeals for absolute exemption of the first three appellants…The Chairman said the Tribunal appreciated the offer to engage in work of national importance. They heard much of agriculture requiring labour and they suggested Mr. Crauford [representing the Board of Agriculture] should communicate with the Board of Agriculture suggesting that they make use of these men.

The Chairman said he had received a letter from the father of a man called Caton, who complained that his son, a conscientious objector, had been very badly used by the Army authorities. He had been punched, pushed about, and thrown down on the floor, which was quite un-English. The father said he could not understand why his son had not been put on the land as was suggested, especially as he had been brought up on a farm. He was quite sure that his son was no use as a soldier, for he was deeply religious, and no power on earth would move him. He was told that his son was now serving a term in a detention barracks, and that when that was expired he was to be sent back to his regiment. – The Tribunal decided that they could not interfere in the matter.