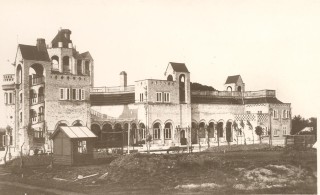 Reginald William Gardner was born in 1891 in the Paddington area of London, and is recorded as having been enrolled at Kilburn Lane School Westminster at the age of three. I can find no trace of him in the 1901 census, but by 1911 he was living at a place called The Cloisters in Letchworth, where he’s described as a working student and land worker. It can be presumed that he came to the Garden City at or after its founding, but whether with his parents or as an orphan (which seems likely) it’s difficult to tell.

There are no records of military service, but he may well be the Reginald W. Gardner who married Helena M. Jones in 1927, in the registration district of Hitchin, and whose death was recorded in December 1970, at the age of 79.

R. W. Gardner, 25, an artist, craftsman and teacher of Letchworth, also appealed on conscientious grounds, and handed in a lot of letters from local residents as to his views.

In answer to various questions, appellant said that if a policy of non-resistance was carried out there would be no war. Germany would have no reason to go to war if Great Britain had not crippled her trade by her Navy. He was willing to suffer death or be put in prison for his convictions. He would not take up arms in any way in this war. He thought he was doing work of national importance in what he was doing.

Mr. Bond Holding: And you don’t mean to make any sacrifice at all, Gardner, I am ashamed of you.

Mr. Lovell: Don’t you think you ought to make a sacrifice? – No. Because I don’t feel at all responsible for the war.

In answer to further questions by the Chairman the appellant said that if he must suffer or make some sacrifice he was willing to give the work under the Pelham Committee a trial.

The case was adjourned for a fortnight for this to be done.