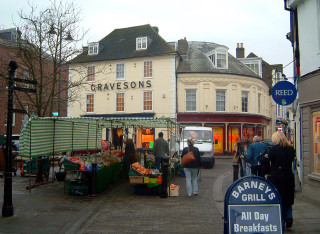 In several hearings, a Mr S. Graveson is recorded as speaking on behalf of the appellants.

This appears to have been Samuel Graveson, a Quaker printer, publisher, philatelist and author who lived in Hertford. He was born in Hertford in 1868, the son of Samuel and Emma Graveson, the fifth of at least six children. His father was a draper and clothier, and Graveson’s Department Store continued to trade on the corner of Maidenhead Street and Market Place until it finally closed in 2001 (see article on Maidenhead Street). In the 1881 census, the 12-year-old Samuel is a boarder at the Friends School in Acworth, Yorkshire, although he seems to be inexplicably missing from the 1891 census.

In 1900 he married Madeleine Rhoda Warner, and the couple settled in Ashford, Kent. In 1910, Samuel made a trip to New York on board the Cunard liner Mauretania (sister-ship of the ill-fated Lusitania). The purpose of the trip isn’t recorded (though it may have had something to do with his philatelic interests) but by the 1911 census the couple were living in Hertford with their 9-year-old son Bernard.

Samuel’s involvement in the hearings was clearly a consequence of his role as a prominent local Quaker, although the men he supported weren’t exclusively Quakers. Otherwise, his main interests appeared to have been in Quaker history and philately, and his publications include Ocean Penny Postage, a monogram reprinted in the 1950s from the Bulletin of the Postal History Society, and a book called Penny Postage Centenary.

In Burton’s second appearance, the report refers to Mr W. Graveson supporting him. Unless this was a typo, it probably refers to Samuel’s elder brother William, who by that time was running the department store with another brother, Arthur.