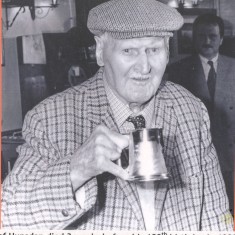 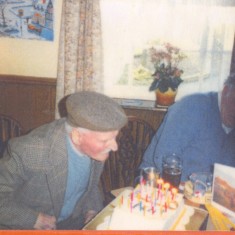 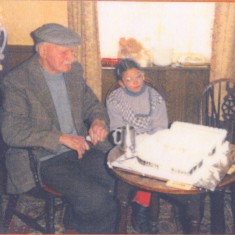 When Joe Randle of Hunsdon died 3 weeks before his 108th birthday in 1992, he was the oldest man Britain.  On reaching 100, Benskins Brewery gave him a tankard and the promise of a free pint a day for the rest of his life, which he claimed every day at The Crown, his local since 1894.

He was always the first one in the pub and loved a chat and to read the papers.  Joe would say: “Don’t talk to me about the good old days, because there were none”.  A married man with a family was expected to live on 15 shillings a week and life was hard.

Joe lived in Hunsdon all his life, apart from the First World War when he sustained shrapnel wounds and lost some fingers while serving as an infantryman in France.  He remembers his mother making the weekly walk to Ware to draw four shillings and sixpence relief for the family of 10, as his father died after falling from a tree when he was 6.  Like the rest of his siblings, he took a job in his teens to help with family finances.  His brother, George, died aged 100 and was a couple of years older than him.

In 1904 he saw the first car that passed through Hunsdon (“You could hear the racket in Stanstead Abbotts”) but never wanted to know about “them new fangled things”.  He never married either.  “On such wages?  It was suicide”, he said.