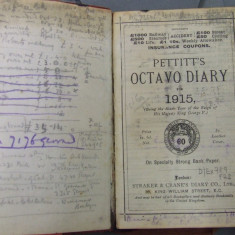 The front page of Julian's diary, made from 'specailly strong bank paper'. 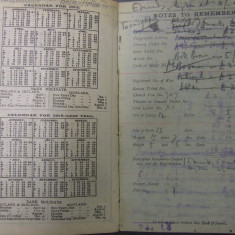 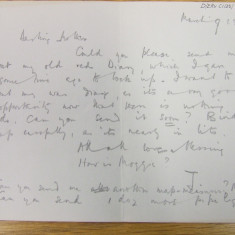 Julian asking his mother to send him his 'old red diary' 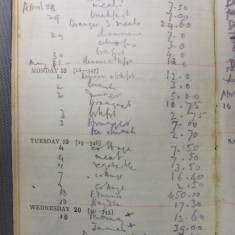 Extract of a budget for food and accomodation totalling £412.60 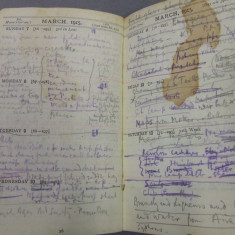 Stained page of the diary 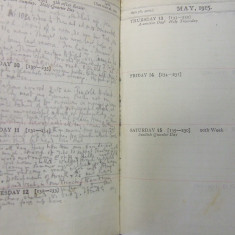 On March 9, 1915, Grenfell asked his mother to send him his old red diary. It has since become an important historical document, filled with Grenfell’s writing during wartime.

The blank left page of the Petitt’s Octavo Diary for 1915 is covered with Julian’s notes of bills and addresses.

The “notes to remember” detail various facts about Julian, from his 5 foot 7 height to his 7×7 church pew number. He has, oddly, not noted his name or address, despite filling in more obscure sections.

Grenfell has written notes in the early, unused months in his diary. Here we see some simple math to total costs, which would be part of his duty as an officer. Items on the list include “cottage”, “lunch”, “dinner”, “meat”, “vegetables”. To the left of the items are dates, beginning with April 28th and ending on May 10th.

On the leftmost page of the stained entry, Grenfell has noted down items that he wants to get hold of. These include cakes, coffee, tea, sardines, mincemeat, soup and chocolate. On the right-hand page, only a few entries are not crossed out; ‘revolver cartridges, ‘brandy and liquors and wine’. Julian often wrote to his mother asking her to send him whiskey and brandy, for, as he said, the other soldiers enjoyed it enormously.

The final entry in Julian’s diary, one day before he was hit by the splintering shell that eventually killed him. The entry is fairly normal, noting that the trenches have been “shelled v. badly”. The realisation that these unremarkable words were the last that he wrote brings home the fragility of life and horror of war.

The diary now resides in the archives at Hertford County Hall, having been moved there from Panshanger.