Picture of, and information about, the DSO 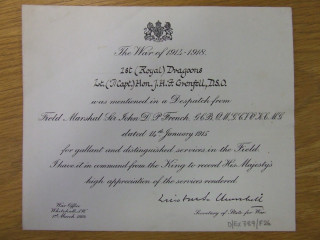 Julian Grenfell was awarded a Distinguished Service Order on the 27th December 1914. The London Gazette reported that he had, on the 17th November, reached a point behind the enemy’s trenches and made ‘an excellent reconnaissance, furnishing early information of a pending attack by the enemy.’  He described the event in a letter to his mother in great detail; he had made a single-handed attack on a German trench to take out snipers.