The Poetry of Julian Grenfell: To a black greyhound

Audio footage and context of the poem 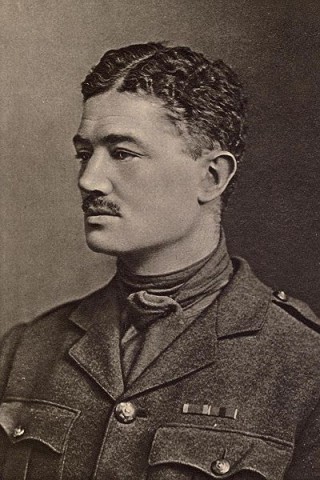 Julian Grenfell in uniform with his DSO ribbon

To a black greyhound

Shining black in the shining light,

Inky black in the golden sun,

Graceful as the swallow’s flight,

Light as swallow, winged one;

See him lie when the day is dead,

Eyes that were aflame before.

Gentle now, they burn no more;

With the fire that made them bright

Hidden – as when after storm

God of Speed, who makes the fire –

God of Peace, who lulls the same –

God who gives the fierce desire,

Lust for blood as fierce as flame –

God who stands in Pity’s name –

Many may ye be or less,

Ye who rule the earth and sun:

Gods of strength and gentleness

Ye are ever one.

Dogs in the trenches

This poem, as the title obviates, celebrates the role of dogs in the First World War. They played a vital part in the trenches; communication through the complexities of warfare was often difficult and dogs proved as reliable as soldiers for running messages. Their small form reduced the likelihood that they would be targeted by a sniper, and well trained dogs would undoutedly outrun a soldier.

It is likely that dogs also provided moments of respite in the midst of war, reminding soldiers of the comforts of home.