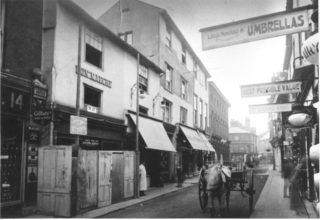 How much gardening can one do with only one hand?!!

“Wanted:  a man to look after pigs, with a knowledge of poultry.”

The man’s clearly got to be either multi-talented or totally confused!

A claim has been lodged for the return of furniture stored at farm at Goose Green occupied by Mrs Annie Oakley.

This is obviously where she retired to when she had finished shooting up the wild west!

I thought all generals were old and had done nearly all of their time in the services – perhaps Mrs Dickinson believes in early promotion.

If the applicant has to apply to the gardener, they clearly need someone who’s familiar with plants, not electrics!

“Domesticated” has got to be better than someone who’s still a little on the “wild” side!

Why can’t one have a good-looking one?

“We stock single boots for men — lefts or rights: Partridge and Webb, Hertford.”

Were there a lot of single-legged men in Hertford at the time?

They obviously stocked nothing for big men!

Clearly nothing to do with Ronnie Barker or Sue Barker!

What rank, then, is the officer?

I won’t ask what lessons she gives!!

Is this a house or a bungalow, and how big’s the crane?

Did the rest get sold separately?

Who on earth wants the job of catching this lot?

“Mr J. Laster, gatekeeper at the local crossing at South Mill, Bishops Stortford, has brought up a young pig by hand.   It is now a good sized porker, is quite domesticated, and performs many amazing tricks.”

Can this one be put in touch with the multi-talented man above?