Our first community history day was set in the beautiful Place House Hall in Ware on Saturday 8th October 2016 and both our project and the play were kindly supported by the Hertfordshire Buildings Preservation Trust.

This display relates to the belongings of Private George French and his family (these were kindly leant to the project by Maureen French, who later became one of the project volunteers involved with the exhibition). 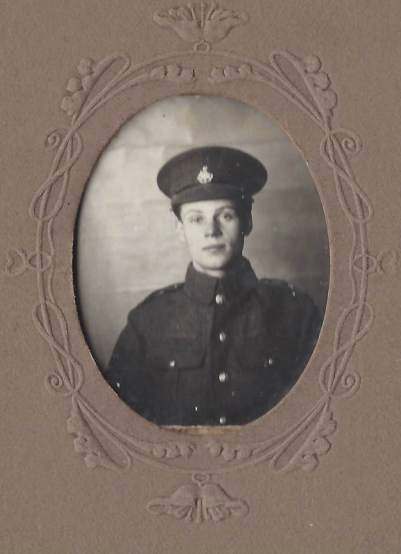 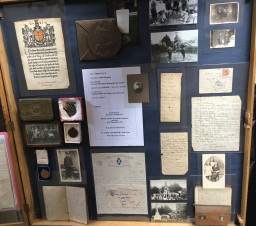 Display of George’s belongings and those of his family 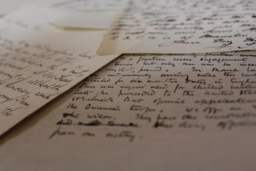 Private George French was the Great uncle of Maureen French’s husband (see picture of Maureen and family below).  With the help of project curator, Emma Blowers, Maureen was able to piece together details about George’s life and that of his mother, father and sisters.

The family lived in 11 Blue Coat Yard, Ware and this seems poignant as our Ware community history event was held at Place House Hall, Bluecoat Yard, Ware SG12 9HL.  Maureen French had the chance to meet for the first time some of her extended family, whilst standing next to the display of George French’s belongings. Here they are below (Maureen French is on the right of the front row). 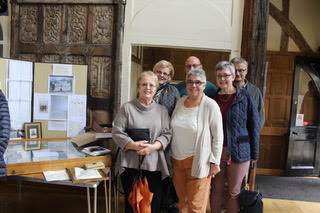 We know that Private George French served with the 2nd Battalion 4th Royal Sussex and then the 2nd Battalion Devon Regiment.   George enlisted in 1913, aged 15 years (he ran away from Ware, enlisted and got found out as he was too young – he was sent back and enrolled again).    He was a keen footballer.  George died on 27th Sept 1918, Age 20.

In the French family collection, we found a small brass box (although Emma Blowers, project curator believes it didn’t belong to George himself as he was sent to the Front in 1916).    The box contains two dried carnations, another little detail but unfortunately, we don’t know what or whom they relate to. 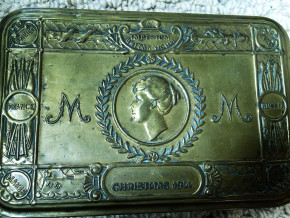 The Intriguing History website, gives us the following information about the brass boxes sent to soldiers at the Front:

The Christmas of 1914 was a unique period in WW1 with many thinking that the war would soon be over and that the troops would be coming home. There was widespread sympathy for the troops away from home and a fund was set up by Princess Mary, the daughter of King George to raise money to send everyone wearing the Kings uniform a Christmas present.

There are several touching items in George’s belongings such as his leather pocket note-book with the pictures of his sisters, Lily and Rose tucked into the back cover (see below). 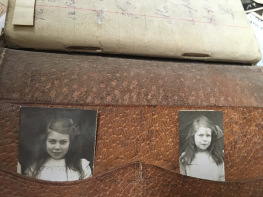 George’s Pocket Notebook with Photos of sisters, Lily and Rose

There are also pictures of George’s older brother, Tom in the collection, including some of Tom at the Front. 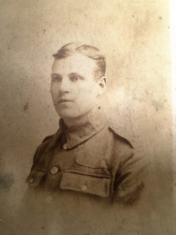 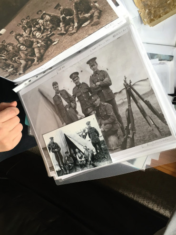 Tom French at the front