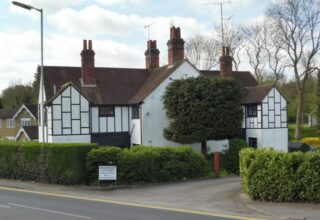 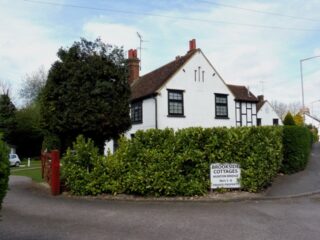 1 - 6 Brookside Cottages. The dedication plaque is between the tops of the windows. Nov 2017
Colin Wilson 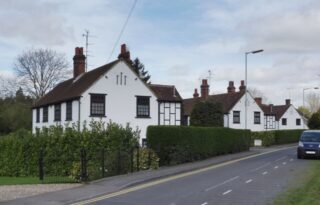 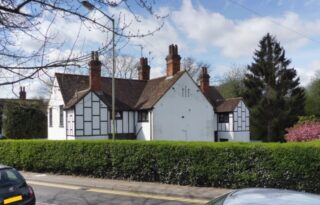 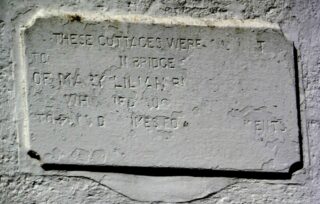 No references to almshouses at Hunton Bridge have been found in the standard works on Hertfordshire. Historical Atlas of Hertfordshire cites an almshouse dating from 1642. This cannot be the same building as the present Brookside Cottages.

Nowadays the Hunton Bridge Cottage Trust is a registered housing trust, also registered with the Charity Commission, providing low cost accommodation for up to 10 people. The charitable object of the association is the provision of accommodation in two houses and eight flats for the poor residents in the Langleybury parish and the neighbourhood thereof at low rents. The Trust is not affiliated to the Almshouse Association.

1 – 6 Brookside Cottages are now in a Three Rivers conservation area. The Council reports do not refer to the cottages as almshouses, but do note they are not old – 19th or early 20th century. While not listed by Historic England, they are regarded as buildings of local historical interest. They are not shown on the 1913 OS map, but do appear on the 1947 edition. Even so, the building style harks back to the Tudor wood-framed image, with ornate chimneys.

The other tantalising information is the stone plaque on the cottages. The two most important parts, the date and surname, are covered over. These cottages were [……. ] to [Hunton] Bridge ……………. of Mary Lilian ……….. who died  [August] [……….]  to provide homes for [residents] ……….  The accounts of the Trust note that the buildings were bequeathed.

It appears the Trust also owned property at 40 – 46 Gallows Hill. This property was sold in 1981 following a recoupment order.

As yet it has not been ascertained whether there is any link between the 1642 almshouses and the Hunton Bridge Cottage Trust. It also not certain if the present buildings are or were used as almshouses. The dedication stone would suggest they were.

https://www.threerivers.gov.uk/egcl-page/conservation-areas. Brookside Cottages are of local interest, but not listed. Site accessed Dec 2021