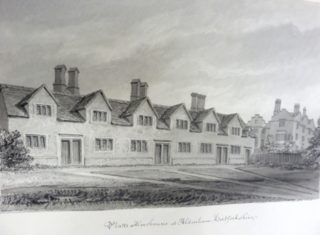 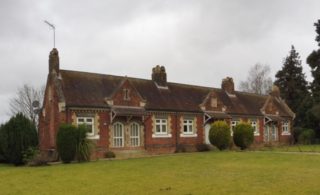 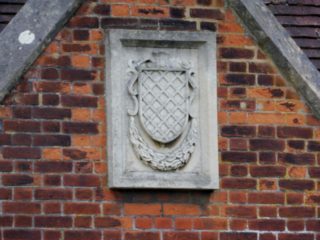 Richard Platt's arms on the front of the building. 2017
Colin Wilson 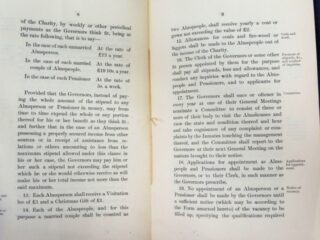 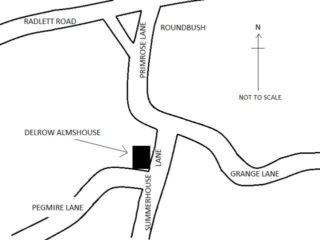 ‘Crased [worn out] in body but in perfect memory’ was how Richard Platt described himself when he wrote his will. A brewer living in Garlickhythe, London, Richard was the proprietor of the Old Swan brewery in the parish of Garlickhythe. He was master of the Brewers Company in 1576 and 1581. He owned land in Aldenham, where he grew up.

His wish was to be buried in Garlickhythe church near his wife and son. The church is just down the road from Mansion House. It was rebuilt following the Great Fire of 1666, but the vaults and chancel were cleared and closed in 1839.

Along with Dame Alice Owen and James Hickson, Platt was one of the three main benefactors of the Brewers Company, a guild dating back to 1438. His arms are on display at Brewers Hall. His portrait can be found in ‘Elstree and Borehamwood Past’, by Robert Bard page 76; there may be a portrait at Aldenham School.

Platt’s almshouses were to be used ‘for the relief and maintenance of poor aged and impotent Persons and such as by reason of their age and other infirmities are not able to relieve themselves by their trade and labours’.

He did not mind if they were men, women, married, single or widowed, but they were not to marry after admittance upon pain of deprivation. Married couples had the same room, habitation, relief and pension of 1 almsbody, and no more. No children could be admitted without permission. No-one with a disease was to be admitted.

Almspeople had to be of good name and fame, of godly conversation and behaviour, and known as having worked for their livings when younger. They needed to have been inhabitants of Aldenham for 7 years (but special cases could be considered).

Almspeople should be over the age of 70, but could be to be admitted at a younger age if thought fit by impotence. Married couples both had to be over 70, unless there were special causes for younger people.  From at least the 1860s the lower age limit was 50 years.

Platt’s kindred were to be given preference. Interestingly, one of the early almspeople was the Widow Platt. There is no information as to whether or not she was a relation. However, she was one of the exceptions to the rule that almspeople’s effects had to be passed to the almshouse on their deaths.

In 1881 the residents were 2 married couples, 3 widows and 1 widower. One had lived in the parish for 10 years; the others had lived there over 40 years or all their lives. An article in the Herts Advertiser and St Albans Times Sep 18 1926 is probably the earliest picture of the almspeople, 7 in number, then aged between 70 and 91.

Divine service and prayers were to be said twice a day in the chapel at the end of the almshouses. All almspeople had to attend unless they were sick or had a good excuse.
They could not be absent for more than 3 nights a year without the consent of the Custos.
Due hours were to be kept; almspeople could be out no later than 7 o’clock in Winter or 9 o’clock in Summer.
The yard and court had to be swept daily, otherwise there was penny fine, which was to be shared among the other poor people.
No non-family sick persons could stay unless with the consent of the Custos.
The Custos was required to be observant and careful.

Platt obtained letters patent from Elizabeth I in 1596 allowing him to build a school and 6 almshouses at Aldenham. The site was land at Boydens Hill which Platt had inherited. An 1832 illustration of the almshouses by Buckler can be found at HALS, reference DE/Bg/4/94.

They were conveyed to the Brewers Company in 1599, not long before his death in 1600, along with endowments for their continuation. As with Hickson’s almshouse, further endowments were made by Neiman and others.

The master of the school acted as the custos (or warden) of the almshouses. In those days the school was small, with the pupils lodging with the master.

Replacement almshouses were built at Delrow in 1864-5 as more space was needed for the school. The site, to the south of Aldenham and Roundbush, is shown on the Ordnance Survey map XXXIX longtitude 20’ 45”west latitude 51o 40’ north. This map was surveyed 1871/2, and published 1883. It shows the almshouses next to a school.

A copy of the almshouse rules is kept at Hertfordhire Archives.

The last almsperson left the almshouses in 1983, by which time the buildings were deemed substandard for such accommodation. They were sold in August 1986, the resultant funds being transferred to the Richard Platt Relief-in-Need Charity.

The buildings still exist under private ownership. They are grade II listed by Historic England, ref 1173191 as of 21st Jan 1980. Platt’s coats of arms are to be found on the end of the building and over the central doors.

Job specifications for various tradespeople can be found in a document deposited at Guildhall Library (MS7297 Specification for Sundry Works Erecting and Finishing the Almshouses at Aldenham). The close attention to detail is interesting. Examples include:
Each kitchen to have a dresser 3ft 6in long of a value of 25/- each.
There are to be 6 coppers of 15” diameter.
Cooking stoves with over 33” openings
Stoves with double backs with 24” openings.
Wallpaper to be 1d per yard.
Two wells or water tanks to be 5ft diameter and 12ft deep.
The WC to have a seat of 1” and a riser on proper bearers.
I cesspools to be 4ft by 10ft deep, and to be connected to the WCs

One small detail is a letter about the late Miss Clark in 1947. It notes that the bed, blankets and some furniture belonged to the Brewers Company.

A charity named the Richard Platt Relief-in-Need Charity has continued to distribute the funds in a more flexible manner, to help needy residents of the parish. This charity is administered by the Brewers Company (Charity Commission ref 215544).

Particulars of the scheme and of the management of the almshouses at Delrow can be found set out in the Company’s Return to the Livery Companies Commission appointed in 1880 (Appendix to Report, 1884, vol. iii. p. 125)

D/P3/25/2 stored at HALS include the 1908 rules and a letter about Miss Clark. Note these have been included in a collection about the Roundbush almshouses

british-history.ac.uk/court-husting-wills/vol2/pp725-730 includes a summary of Platt’s will, as enrolled in November 1600.

The information about where he grew up was found at https://www.brewershall.co.uk/public-news/beer-money-for-school-students/