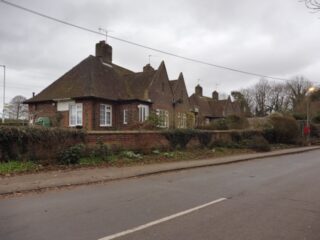 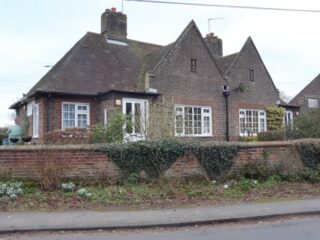 Close up of two of the Round Bush almshouses. The datestone on the arch can just be seen at the right of the image. Feb 2017
Colin Wilson 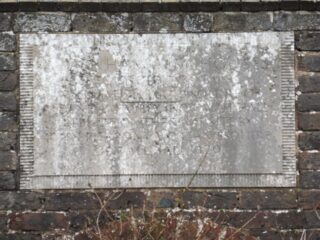 The date stone on the arch between the two almshouses. Feb 2017
Colin Wilson 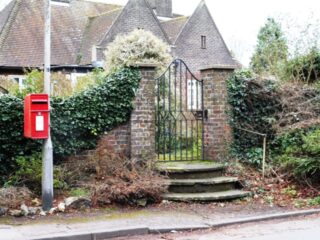 The gateway to the almshouses, with the other two dwellings in the background. Feb 2017
Colin Wilson 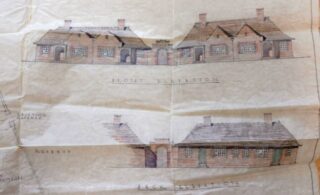 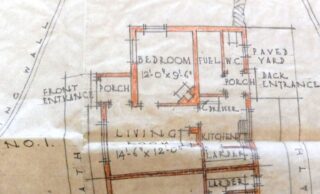 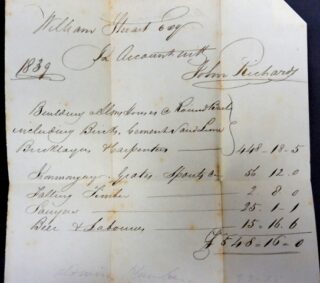 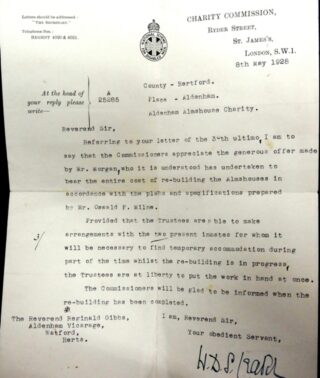 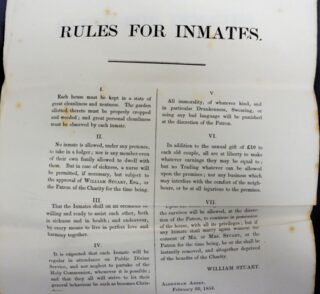 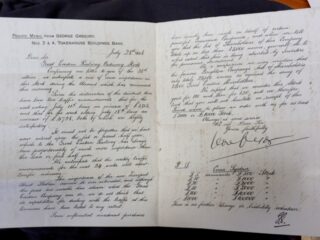 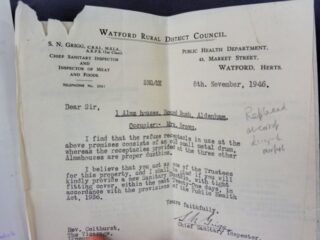 Even today Round Bush is a small community about half a mile east of Aldenham. Cussans recorded that four neat, well-built cottages were erected by the late Mrs Stuart, of Aldenham Abbey. This was in 1839. Whether it was Henrietta or her husband William who founded them seems to vary between sources, but the deeds name her husband. Do remember this was before the time married women could normally have their own money. Henrietta (born 1799) inherited Aldenham Abbey from her father in 1830. She assisted in the supervision of the almshouses until her death in 1853.

A bundle of documents held at HALS provides a wide range of interesting information, both official documents and day-to-day matters. A number are handwritten. An 1875 bill for assessing property tax was for 13s 4d, to be paid in postage stamps. Recommendations about inmates are frequently small handwritten notes. In 1928 Mr Morgan paid for complete rebuilding and further endowed the almshouses to the tune of £3000. This meant some inmates required temporary accommodation.  The architect’s plans are included. Each dwelling consisted of a living room, bedroom, kitchen with larder, fuel store and an internal WC. In 1946 three dustbins were plastic; the other was a metal drum. The Sanitary Inspector required its replacement. Water rates for No 4 was £1/3/0 in1946. There are three copies of the rules, though one changes the title to Bye-Laws. These rules include  attending church, looking after each other, good behaviour, such as no drunknenness or swearing. If a spouse died, the survivor could remain. In the case of remarriage, the new spouse would not obtain residency rights, and the marriage had to be sanctioned first or the dwelling would have to be vacated.

An article in Wall Hall in Times Past adds that the building cost £548 16s (a copy of the bill is included in the HALS bundle). The almshouse was for the benefit of 4 aged or infirm couples, with preference being given to labourers on the Aldenham Abbey estate.

In 1854, the year after Henrietta died, William instituted a trust for their maintenance.  He invested £1,567 14s [slightly less than the figure quoted in VCH] in Consols to provide for repairs and £10 annual allowance to each occupier.

According to the Charity Commission website, the purposes of the Aldenham Almshouse Charity (ref 212578) are 1. Provision and maintenance of almshouses for poor married couples of good moral character and members of a protestant church not opposed to the Church of England. On the death of one party, the survivor may be permitted to continue there until remarriage. 2. Provision of an extraordinary repair fund. 3. Subject thereto for the benefit of the almspeople. The governing documents are dated 1854, 1913 and 1966.

Victoria County History records that the stock was realized in 1898 and the proceeds re-invested in the purchase of £1,727 15s. 3d. India 3 per cent stock, to which a sum of £72 4s. 9d. like stock was added by the trustees, raising the trust fund to £1,800 stock, which is held by the official trustees.

The datestone on the arch between the almshouses cites ‘Aldenham almshouses [were] founded 1839 by [William] Stuart esquire of Aldenham Abbey (now Wall Hall) [and] rebuilt on the same site by John Pierpoint Morgan esquire of Wall Hall 1920’. The almshouses were completely rebuilt, facing a different direction, as opposed to improved. This is indicated by the OS maps published in 1883 and 1947.

The Housing Care website (dated 2009) notes that the buildings were further modernised in 1965 but interestingly reports they were built in 1820, which would have been a year before Henrietta and William were married. They were described as 1 bedroom bungalows, mobility standard properties, and had a Community alarm service and a garden. Access was fairly easy, but less so for those who were not so  mobile. The savings limit was £16000, and cats only were generally accepted.

The entry notes that the amenities such as shops and doctors are 3 miles away, which seems a long way for aged and infirm people. However the bus stop is only 20 yards away, and the 602 bus runs half hourly from about 0730 till about 2130 going to Watford via Bushey and to Hatfield Business Park. This was in July 2020. Fortunately the pub was next door and a garden nursery opposite so at least there is the possibility for social contact. The latter may have been specially useful as a stipulation in the 2020 advert was to look after the gardens.

In May 2013 Kathryn Snowdon, Senior Reporter for the Watford Observer, reported the case of 84 year old retired policeman Bryan Hyde, of Round Bush. One of four people who applied for an almshouse, he was annoyed at being unsuccessful. The rest of the report throws some light on the workings of the application procedure at that time. An advert had been placed in the parish church (although that does not mean other adverts were not distributed). There was no consultation process between the committee and any applicants, the application being based solely on the written application, following rules dating back to the foundation. Minutes were not taken in order to protect privacy, and there was no appeal against the decision. And an almshouse vacancy only turned up about once in a decade.

The Aldenham Almshouses Charity advertised a vacancy in March 2020. Priority would be given to people who were over 60 and had less than £25,000 in capital (up from the £16000 of 2009). Couples were preferred (but not essential) and should be from the Parish of Aldenham or with long term local connections. They should be physically able to look after a garden. They would be those generally in the greatest need who would fit well into the small community. Written applications would be followed by interviews (in 2013 only written applications were assessed).

Fire and infirmity are dangerous companions. The Herts Advertiser for 8 Jun 1878 reported on an inquest held at the Round Bush beerhouse, Aldenham. 78 year old Hannah Hawtree suffered from fits and often lit her lamp at the fire, despite being warned. The lamp exploded and caused the fire in which she was burnt to death. Similar cases occurred in other almshouses.

The Aldenham, St John the Baptist parish records include about 160 documents about the almshouses. These can be accessed at HALS, ref  DP/3/25/2. They are a mine of information.

Herts Advertiser Saturday 08 June 1878 Page: 6 col 6. This can be viewed on-line on the British Newspaper Archive website at https://www.britishnewspaperarchive.co.uk/