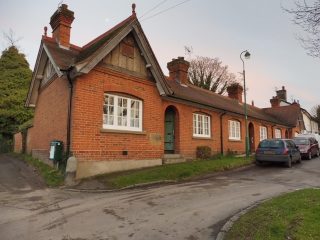 Moss Cottage Homes. The foundation stone is by the entrance. The centenary stone is on the low wall to the left. Feb 2017
Colin Wilson 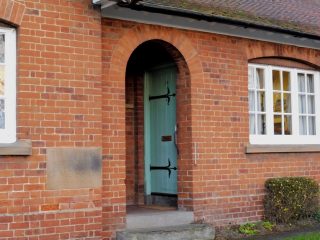 An entrance porch , with the foundation stone to the left. Feb 2017
Colin Wilson 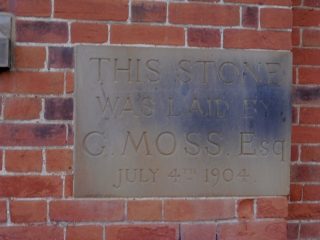 The foundation stone near the bottom of he left gable wall. Feb 2017
Colin Wilson 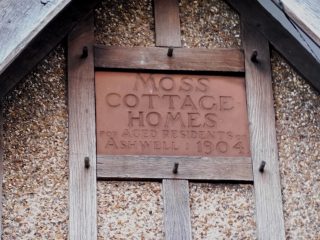 The datestone on the left gable. Feb 2017
Colin Wilson 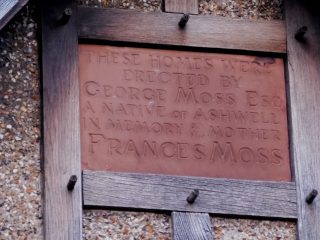 The dedication stone on the right gable. Feb 2017
Colin Wilson 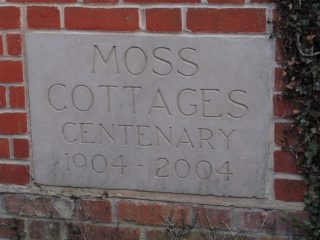 The centenary stone on the side wall. Feb 2017.
Colin Wilson

George Moss dedicated these almshouses to the memory of his mother, Frances, who had died in 1838, 66 years previously, at the age of just 37. George, a native of Ashwell, was only 13 years old at the time and it seems he left Ashwell soon after. By the time he erected the homes he was 80 years of age and had become a Freeman of London. He died in September 1909.

Moss had made a number of charitable donations in the past, but wanted to leave a more enduring gift. Following advice from his friends Mr and Mrs Bowman, he decided on an almshouse. He wanted it to be regarded as a haven of rest rather than a charitable institution.

Building started in 1904. A photo held at the Ashwell Museum shows the laying of the foundation stone, and the Herts Reporter carried an extended account. The building was completed in March 1905, Once more the Herts Reporter covered the event. The building cost was £3000. Victoria County History cites an indenture dated July 1905, adding that there was an endowment of £2000 worth of LNWR railway stocks, augmented by £800 two years later by Frederika Bowman.  However, a report in the Royston Crow says this extra £800 was given by Moss in NW railway stocks. David Short says that a trust was set up, and that 8 dwellings were available. There may be some doubt about this number, as VCH cites six dwellings, and the OS map seems to show six. Part way through the construction a water certificate was granted, provided the steps to the spring were repaired.

One document inside the foundation stone stated the beneficiaries were to be aged or inform persons of not less than 60 years of age, who had been Ashwell residents for a  considerable time and were of good character. According to Victoria County History, the beneficiaries were aged and infirm persons, and the inmates were either married couples (each married couple counting as one inmate), single women or widows. The first six residents were widows. The stone on the building mentions aged residents. However, the Charity Commission website specifies they were originally set up for widows of Ashwell. The more recent stipulations are for aged or infirm persons who are inhabitants of the parish of Ashwell, with a preference for widows. There is a further clause allowing people not connected with Ashwell, but only with the permission of the Commissioners.

Moss himself dealt with the administration until Charity Commission registration was obtained. After that, organisation was in the hands of trustees. Three were 3 ex officio, 4 were appointed by Ashwell Parish Council, and there were 6 co-operative members, appointed for life. One of these was Moss himself.

Victoria County History says that in the beginning each single resident or married couple received 5s a week. A 1905 article in the Royston Crow explains. the situation. Mr Moss said that if the poor relief was reduced to less than half what the residents received before, he would have the right to evict them at a week’s notice. Thus the parish would have to fund them. He pointed out that the residents were weekly tenants, liable to pay for repairs and rates. They lived rent free, with a pension of 3s 6d. The resolution was that the poor relief would be reduced to 1s 6d, bringing the weekly payment up to 5s, plus £1 for coal for the remaining half year. Moss’ premise was that he wanted to add a facility, but did not intend to reduce payments by the local authorities.

As at 2017, the homes were affiliated with the Almshouse Association. They are also registered with the Charity Commission, ref 238956. The financial history shows a steady income, with expenses varying. This is, of course, only to be expected if repairs, maintenance and improvements are taken into account. The governing scheme dated 1979 has been altered a few times in 2006, 2007, 2018 and 2019.

Newspaper articles. All are from Herts Reporter and Royston Crow. These issues can be viewed on-line on the British Newspaper Archive website at https://www.britishnewspaperarchive.co.uk