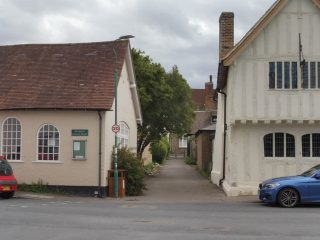 Alms Lane in Ashwell was not always known by that name; an 1877 map shows it was formerly Pickings Lane. The implication is there was a reason for the name change. While the exact location of the almshouses is not certain, it seems they were opposite what is now the museum (formerly the old Town House).

The 1829 rate survey for Ashwell shows the parish were proprietors of property 126. The Ashwell tithe map for 1841 shows the almshouses.  It shows 3 properties in Alms Lane owned by the parish authorities at lots 360, 361 and 362.   More specifically, an 1877 OS map shows the almshouse to the right of Alms Lane (refs 280 284). It may be of use to compare the 1898 and 1940 OS 25” maps to compare which buildings existed, although they are not annotated. Consisting of a dwelling house and 10 cottages, they were pulled down in the 1930s when the telephone exchange was built.  There is the chance they existed for nearly 300 years with hardly any mention in the public record.

One interesting anecdote concerns Elizabeth Gordge. She was widowed at the age of 25. Her stepchildren found apprenticeships, and she lived in the almshouses till her death at the aged 46. Most almshouses cater for elderly people, so the fact that she was helped at such a young age is unusual.

Unfortunately at the time of writing it was not possible to consult all the relevant maps due to Covid restrictions; most of the information above was gleaned from David Short’s article. A previous visit to the Ashwell museum produced no further information.

There do not appear to be any references in Clutterbuck, Cussans or Victoria County History. However, these publications tend to record benefactions by individuals rather than parish facilities.