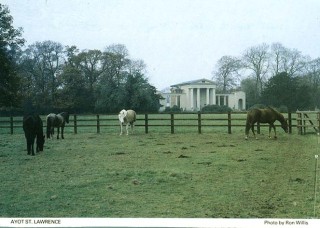 Ayot St Lawrence Church was built by Sir Lyonel Lyde in 1779 in the fashionable neo-classical style. It replaced an older church in the centre of the village which had been partially demolished, apparently because it obstructed the view from Sir Lionel’s new home.

Sir Lyonel Lyde was a prominent Bristol merchant who built up his fortune through trading with the West Indies and Virginia. He chiefly imported tobacco produced by slave labour. He must often have dealt with slave traders, and in 1773, he accepted the estate of Col Andrew Monro, which included ‘forty Negroes, and their Increase’ as a mortgage against tobacco debts.   Many merchants settled in Hertfordshire because it was near to London and their shipping interests. The estate at Ayot StLawrence had been bought in 1723 by Cornelius Lyde, who became Sir Lionel’s father-in law when he married his cousin, Rachel.