from "Baldock Voices : The town as remembered by Baldock People in conversation with Edna Page and Nora Penfold" published by Egon Publishers Ltd 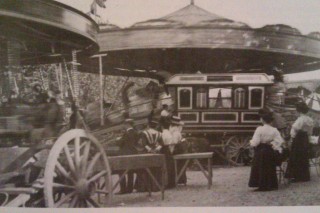 October 2nd or 3rd was the one day of our lives – we used to run up the street to see who was coming and who wasn’t and if you had 6d in your pocket, you were lucky. I didn’t go on the roundabouts ‘cos I spent mine on rock and nougat so I never got a ride. The fair was brought in by horse and cart before they got lorries. Vans were parked in town and the horses were put in fields to graze, then they went from Baldock to Nottingham for the Goose Fair.

Rides cost 1d or 2d and people would make a day of it from the villages. Sometimes they used to sell horses and ponies in Whitehorse Street on fair days in the early days. They would run them up and down the street to show them off.

We used to enjoy the fair – we watched them making the brown white spit rock. Old Mrs Harris would swing it and roll it and put it on a hook and spit on her hands and pull it out again.
There weren’t so many gaming machines by there were lots of old rides – not as fast as they are now.

We always looked forward to the fair. There were relations who perhaps you hadn’t seen for a year, but they’d come back for the fair. Granny had The White Hart pub and she always had a big ham in the back and the pub looked different to today’s pubs – the barrels would all be set up in the bars and she’d draw beer from the barrels and during the fair there would be people spilling out into the street and you wouldn’t have seen them all year. It  was a real meeting point.

The fair was lit by naptha lamps. I suppose it was dangerous, but the fair doesn’t seem the same now. And I liked to listen to the hurdy gurdy, and with all the steam engines it had a smell of its own. We had a few pennies to spend at the fair – we’d earn them by gleaning or helping Dad pick up the potatoes. We went on the roundabouts and bought rick. We had confetti and sawdust balls covered in tinsel.

Baldock Fair used to be ankle-deep in confetti. It was sold for 1d a bag and you’d get hold of each other and tuck it down. We used to undress in the shed. Mum wouldn’t let us in the house. We looked forward to the fair, but we never had much money but I remember my brother gave me and my sister a penny between us, so we bough some red rock from the Rock King. He used to auction all his rock off late at night. You could get sausages, fish and chips and welks all down the bottom end near the Rock King.