from "Baldock Voices: The town as remembered by Baldock People in conversation with Edna Page and Nora Penfold" published by Egon Publishers Ltd 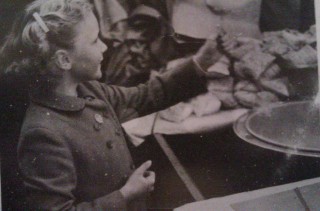 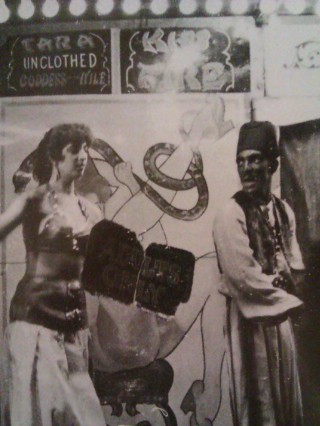 The excitement of the fair was wonderful. As you got nearer you could hear the noise and when you turned the corner from Mansfield Road into the High Street it was wonderful with the lights, the music, the smells. And all down the road they used to park the trucks where they hung their equipment on great big hooks. On the way to school the most daring boys would hang onto these hooks and swing on them.

And at night everything seemed so mysterious because you weren’t usually allowed out after dark and you could hear a sound like a hum getting louder as you approached the fair, then it all hit you just as you turned the corner.

We had The Dodgems, Jollity Farm and The Whip and The Cakewalk – the Big Wheel came in later. They used to have things where the men could show off their strength. There was a big hammer and the men had to hit a metal surface in order to make a bell rings. All the girls would stand round and egg their boyfriends on to see who was strongest. I only had one go but I couldn’t hit it hard enough to make bell ring, so that was the first and last time I tried.

Then there was a punch ball that you pulled down and it was suspended on a chain. you had to hit it and see how far it made a needle swing round. This was another favourite with the young men who wanted to show their muscles off.

There was a ghost train too and the tunnel of love and if you were asked to go on that, well… but I don’t know how good it was – I was never asked on!

The prizes were all make of soft plaster or chalk and young could play hopscotch with them for weeks after. But you could also win china – my brother won a fruit set.

The first time I went to the fair on my own I won a canteen of cutlery on the Bingo. All the forks and spoons used to bend after a while.

Down Whitehorse Street there used to be Billy Wood’s Boxing Booth, just near The Vic Pub, and most of the contenders came out of the pub. The usual sequence of events was that there would be five or six bouts in an evening and Billy Woods would put up his champion and anyone who was prepared to take on Billy Wood’s fighter had to go three rounds and they could win a fiver.

I remember one chap from Stevenage was fighting Billy Wood’s champion and there was a local referee who wasn’t in a great state really and I think it got to Round 2 when, out of the blue, the Stevenage fighter catches the champion a heavy punch and knocks him to the canvas and we were all there cheering and in the excitement the crowd stamped and shouted and counted to 10 and counted him out. But the referee in his infinite wisdom says he is the referee and would start the count when and where he though fit to do so, and he couldn’t count while we were making such a noise, so, of course, he started his count after the 10 and by 15 or 16 the fair bloke got up and knocked seven bells out of the Stevenage man. So the poor Stevenage bloke never win his fight, but at the end of the event stalls and God knows what else when flying into the ring and, needless to say, the referee retired to the Vic and was never seen again.

The booth was very popular and, in fact, it was so popular that, after the fair had gone, it quite often stayed and moved, I believe, to the field behind St Joseph’s Convent up by the motorway. And it would stay up there for a week or a fortnight – just as long as it was still taking money. It was always the local boys wanted to show off. But most of it was for real – there was quite a lot of blood there at times. It faded out in the mid-sixties.

It was held in a marquee and the champion would be paraded outside and they’d call out, “Can you beat the Champion?”, and, just like the films, the girls would look at their boyfriends and say, “Go on, you can beat him.” But they didn’t fancy their bloke any more when he came out covered in blood! But there were a few hard cases in the town who could well look after themselves.