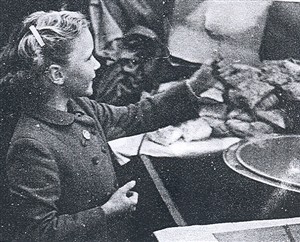 My memories of Baldock Fair ‘before the war’ are perhaps rather selective.  I was quite young so I missed most of the excitement that went on late at night as we were usually taken home before eight o’ clock.

As the school was only round the corner we would persuade mum to meet us and take us to the fair.

The day the fair arrived was one of great excitement. The caravans were parked all up the High Street and along Mansfield Road.  Some were still the intricately carved wooden vans favoured by gypsies, others were modern vans with pneumatic tyres,sculptured glass in the windows and fancy lace curtains.  No electricity, they all had oil lamps.  As much domestic work as possible eg peeling potatoes was done outside on the grass verge.

Outside Edna Sale’s shop were the rowing boats on a high scaffold and with brightly coloured tassels.  I hated them!  Mum seemed to think they were safe for her little darlings.  “No standing” it said, Standing! All I wanted to do was lie flat on my face and be sick. I preferred the round-abouts.  They had “galloping horses” or sometimes “galloping cockerels” with cheerful steam organs.  We always persuaded dad to have a go, or several goes on the coconut shy.  We HAD to take one home-it would have been cheaper to buy one from Mr. Fry the greengrocer.

We always visited ‘the Rock King’ (I still do!) with it’s piles of brightly coloured rock, huge humbugs and nougat – pronounced nugget and often spelt that way too!

There were other sweet stalls as well. I remember seeing a woman making ‘spit toffee’ – you had to keep on spitting on your hands to stop the mixture sticking to them.  The glistening golden brown toffee was slung over a hook, pulled down to a certain length and then slung over again to repeat the process.

A lot of stalls I don’t remember because I was too young to enjoy them but there must have been shooting galleries, “try your strength” and various games of ‘skill’.  There was certainly a Boxing Booth in Whitehorse Street outside the Wesleyan Chapel.

They had just produced some innovations.  There were the ‘bumper’ cars -never ‘dodgems’ – we were intent on crashing into our friends.  Dad and I would spend ages on them, with my two little sisters protesting that it was their turn.

There was also the “Jollity Farm” – some fairs called it, “Noah’s Ark” an ‘electric’ ride taking its power from a big unprotected generator.  We tried this but mum and the little ones nearly fell off so it became off limits!

When the war came there was no more fair – the High St was much too busy with the military convoys-usually American.  But towards the end (perhaps 1944) the fair came back, but in Anchor Field.  Gone were some of the more expensive modern rides but some glorious old roundabouts had been brought out of store.  The rides, the tuneful organs and the opulent morning figures were such as you now only see in a museum – have you been to Thursford?

When the war was over in early October the High St was overflowing.  By now mum was the only member of her family still living in the town and suddenly our house was besieged by returning relations.  Mum got fed up with making tea and sandwiches but we thought it fun because these seldom seen aunts and uncles would slip us a few coppers to spend at the fair.

By 7.30pm the fair was solid with people, you could hardly move.  You met everybody-people you had not seen since the last fair as well as the boy or girl you had sat next to in school that morning.

The new ‘rides’ as well as the old ones – the ghost train and the cake walk were fun.  Dad and I would compete at the shooting galleries or darts games. He even took me to the Boxing Booth once – that was enough.

As you got older you became more ‘sophisticated’ and are inclined to go off these simple entertainments – a pity in many ways. Now that I live nearly on top of the fair and its flashing lights illuminate my upstairs rooms I often think of the earlier days and do not begrudge this generation the fun which the new technology of fair rides brings them.