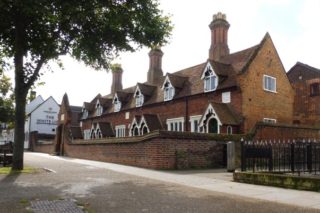 Wynne's almshouse as seen from the road. The path is Pepper Alley. Roe's almshouse can just be seen on the right, behind Wynne's. 2018
Colin Wilson 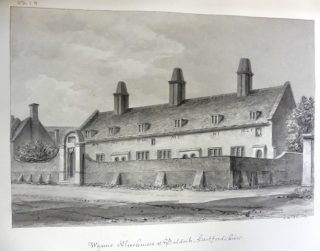 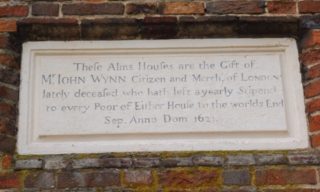 The dedication stone in the gateway arch. 2018
Colin Wilson 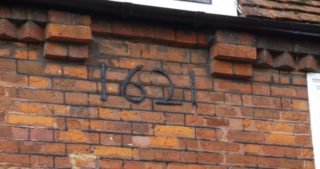 Part of the iron lettering just below the eaves. 2018
Colin Wilson 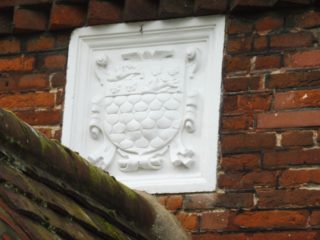 One of the carved panels on the front of the building. 2018
Colin Wilson 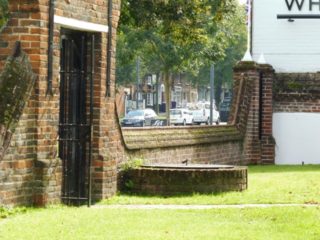 The rear of the gates. Note the structure which looks rather like a well. 2018
Colin Wilson 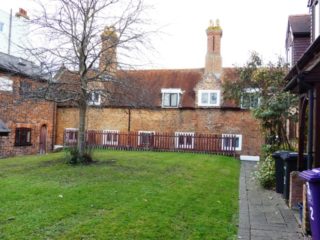 Wynne's almshouse as seen from the rear. To the left is Roe's almshouse. To the right is part of Walker's Court. 2018
Colin Wilson 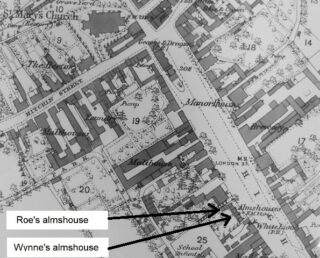 Money and shady dealings often go hand in hand. John Wynne, a citizen of London and a member of the Mercers Guild, died in 1617, leaving no family. It is thought his wife and children had died of the sweating sickness. His father came from Baldock (linking him with the town). He left £1000 to provide for almshouses and for an endowment. Gerish wrote an article about him in the Herts & Cambs Reporter for 5th Feb 1909 p6.

William Swayne (his servant) was the only person to prove the will; others trusted him. But he turned out to be a rogue. Swayne, shall we say, had other ideas about the use of the purchased land. As nothing more than land purchase had happened after six years, the Churchwardens & Overseers took the case to the Court of Chancery in 1623. The rector, four substantial people in Baldock and Wynne’s three brothers were appointed trustees, and the almshouses were built. They were sited fairly close to the market and St Mary’s church – but the OS maps for about 1900 show the pub was next door and a brewery was opposite. We shouldn’t read too much into this, as most towns had plenty of drinking places.

The foundation is recorded on the outside of the building. There are carved crests on the front wall. Along the front wall in iron letters are the words Anno Domini 1621. There are two dedication stones, one of which is on the gate arch, which both read, ‘These Alms Houses are the gift of Mr John Wynne citizen and merch. of London lately deceased who hath left a yearly stipend to every poor of either house to the world’s end. Sep Anno Dom 1621’. Note the date – not 1617 or 1623.

The original provision was for six poor old folk, later widows, though this was increased to twelve between 1676 and 1912. The financial provision was for six to receive 40s. a year. The extra six received a smaller allowance (£3 a quarter instead of £4) and support came from other benefactors. Cussans and Victoria County History list many of these as do charities linked with the United Almshouse Charity. There were also links to the Fifteen Houses Charity, which dealt with a number of Baldock schemes. The residents were likely to have had poor relief. When a resident of the lower floor (the better one, without the need to climb stairs) died, one of the upper floor residents would take her place. Gerish wrote a letter about this  in the Herts and Cambs Reporter for 13 Sep 1912.

Any building lasting over 4 centuries requires repair, modernisation and alterations. Some changes were made to the exterior. A print by Oldfield pre 1790 compared with a Buckler print of 1831 shows the upper part was altered. The Buckler drawing shows a rounded top to the entrance gate, flat tops to the dormer windows and no porches for the doors. Various alterations were made in the mid 1800s, under the supervision of Mr Pryor who also made up the balance of the cost. An article in the Baldock Mail suggests they were closer to their original condition after the Victorian works.

More important were the internal changes. Access to the upper rooms was through the lower rooms. In 1896 wooden screens with sliding doors were placed in the lower rooms to increase privacy. At some time the accommodation was on two floors for each resident – not too convenient as people aged. There was a time when the building was severely vandalised inside to the extent they were uninhabitable. It makes you wonder what happened with the residents (if any) at that time.

The schedule of about 1960 between Urban District of Baldock and United Almshouse Charities reads, ’To reconstruct six “Wynnes’s” almshouses into three self contained flatlets on the ground floor and three similar flatlets on the first floor and to adapt the two “Roe’s” Almshouses so that each unit is provided with its own kitchen, W.C. and bathroom, with constant hot water supply; new staircases to give access to the first floor accommodation and facilities for the storage and cooking of food, and the storage of fuel. To instal electricity and gas for lighting and heating and an internal water supply. The ground floor of the six Wynne’s Almshouses to be relaid on a damp-proof membrane. The drainage system to be reconstructed and extended and footpaths provided.’ An annual grant was payable for 20 years.

Of course, this all costs money. One suggestion was for the proceeds from a bottle bank to be used, although it was accepted there were many other charities who could make use of such funds. District Councils, regeneration authorities and English Heritage were also approached. There was some land at the back of the almshouses. New houses, now called Walkers Court, were built on this land, built in a sympathetic style. Local people were concerned when a ‘For Sale’ board went up outside the almshouses. They didn’t realise it was the new houses, not the almshouses, which were on the market. The profits from the sale were used to refurbish the almshouses. The trustees were further authorised to take out a loan. Restoration was expected to be completed by 1996, as four 1 bedroom flats.

A Couple of Glitches

Most of the time the life of the widows caused little anxiety. In 1837 Widow Pate and Widow Woolfe were summoned before the trustees as ‘having given way to habits of intoxication’. They were warned.  In 1843 the trustees decided to expel Widow Woolfe for intoxication but relented due to her remorse. Even so, she was removed from the almshouses in 1849 under the order of two of the trustees. It seems she had not learnt her lesson – but do note the twelve year timescale so maybe she wasn’t as persistently intemperate as may first be thought, or the trustees gave her as much leeway as they could.

This led to a requirement that all widows had to sign a declaration of good behaviour and that they would attend the parish church of Baldock.

In 1875 Widow Poulon, then aged 77, was found lying beside her bed in her nightgown, and in a state of intoxication. She fell off the bed after being placed on it. She was given another chance due to age and likely destitution. However, in 1884 (now 86 years old) she was again found guilty of drunkenness and removed to the Hitchin Union. Once more, note the 9 year timescale.

Two other residents were removed due to long periods of absence.

Gerish adds a note which may reflect attitudes to the needy in his day (about 1909). ‘When the survivors are reduced to six, that number only shall in future be continued, and that they shall be paid the whole of the rents and dividends, in order that a more respectable class of persons other than mere  paupers shall be introduced, and especially such as do not receive parochial relief.

The History & Antiquities of the County of Hertford, by Robert Clutterbuck
vol 2 p264
Printed by and for John Bowyer Nichols, 25 Parliament Street, London 1827

DP/12/29/12 Has typed manuscript by Gerish and the original local newspaper (5 Feb 1909), hand-written sheets updating the information, and draft agreement between Urban District of Baldock and United Almshouse Charities c1960

DP/12/8/2 Vestry minute book (1800 – 1845)   Detailed minutes, sometimes quoting correspondence and accounts in full. Includes the accounts of the trustees of the Fifteen Houses and Almshouse Charities.

Charity Commission
United Almshouse Charity link is http://apps.charitycommission.gov.uk/Showcharity/RegisterOfCharities/CharityWithoutPartB.aspx?RegisteredCharityNumber=207178&SubsidiaryNumber=0
Almshouses of John Wynne is a linked charity, ref 207178-1The governing document is a scheme of 26th Sep 1958
Note there are number of other linked charities

Fifteen Houses Charity link https://beta.charitycommission.gov.uk/charity-details/?regid=211074&subid=0. Its current function is to manage funds for the church.

Baldock Mail has a number of relevant articles. Baldock library has a useful index.