Letter from the Dardanelles 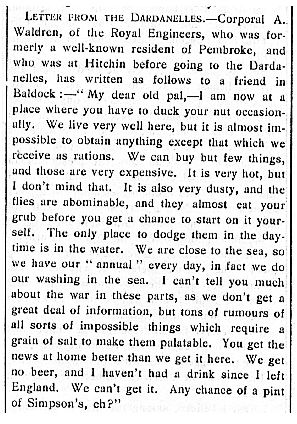 Corporal Alfred Waldren (Royal Engineers) had lived in Pembroke Road in Baldock and was around thirty-three years old when he wrote this letter from Gallipoli in September 1915.  It was published in the Letchworth Citizen on 10th September of that year.  This was his second term of service following his first in India with the Rifle Brigade before the Great War.  He was discharged from the Reserve in January 1914 and re-enlisted in the Royal Engineers soon after the declaration of war.

Alfred does not seem to be too worried about the Turks with his greatest adversaries being the flies that swarmed around the camps.  He complains about how difficult it was to get the extra little items which made life more bearable.  The troops in Gallipoli did not have access to shops in the towns behind the lines which their comrades in France had.  The NAAFI was not formed until 1921 and often the only available official outlet was the YMCA hut.  The YMCA did some wonderful work in all theatres of the war but, as a temperance organisation, did not stock the thing Alfred missed most … a pint of Simpson’s ale.