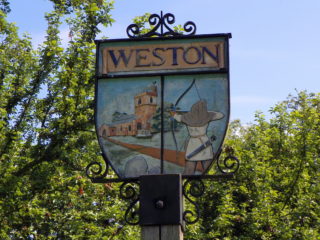 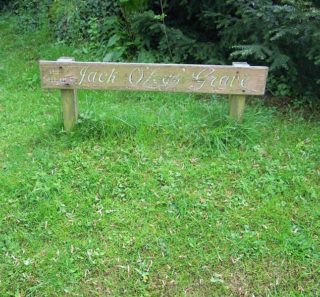 When we think about the outlaw who’s a friend to the poor, we normally go straight to Robin Hood and Sherwood Forest (although his legend was earlier associated with Yorkshire) but Hertfordshire has its own equivalent: Jack O’ Legs.

Like Robin, Jack was a legendary archer, who was said to have been able to put an arrow through a rook at the distance of half a mile. Unlike Robin, however, he was a giant.

Jack lived during the 12th century in a wood in the parish of Weston, near the Great North Road (now the A1) where he preyed on rich travellers, whom he spied out from a hill near Graveley, still referred to as “Jack’s Hill”. Similarly, “Jack’s Cave” nearby was where he stored his booty, though this is now filled in.

Though the scourge of the rich, Jack performed many acts of charity to the poor and unfortunate, just like his more famous equivalent, and nothing angered him more than the Baldock bakers, notorious for their short measures and profiteering at the expense of the poor. Jack would frequently turn up on market day and overturn the stalls of offending bakers.

The bakers didn’t take this lying down, though, and eventually a group of them managed to trap him in Baldock churchyard and succeeded in putting out his eyes. Before hanging the now-helpless giant, they granted him the same last wish often attributed to Robin Hood. His great bow was put into his hands, and Jack fired off an arrow, asking to be buried wherever it fell.

His last bow-shot was a prodigious one. The arrow flew all the way from Baldock to Weston, where it struck the church tower and fell into the churchyard, and it was there that Jack’s neighbours buried him. The stones at his head and feet are fourteen yards apart, and even so he’s said to have been bent double to fit him into the grave.

One rather curious interpretation of the legend, proposed in the 18th century by the Rev. Nathaniel Salmon, is that the story was inspired by Richard de Clare, second Earl of Pembroke, who was nicknamed Strongbow1. Though best known for his role in establishing English rule in Ireland, de Clare was also lord of Weston, lands that were confiscated from him during the Anarchy (1135-1154).

Whatever the value of this interpretation, Jack O’ Legs remains an engaging figure of legend who deserves to be better remembered nationally.

1 Possibly, in fact, a misinterpretation of the word Striguil, an old name for Chepstow.