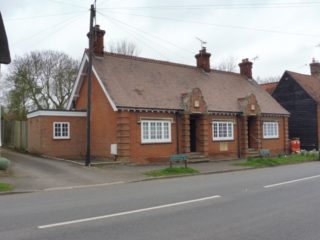 The Stallibrass almshouse in 2017
Colin Wilson 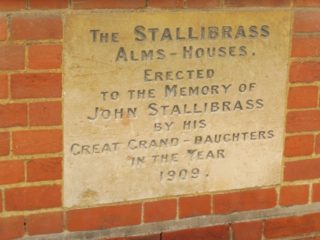 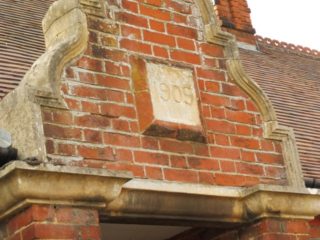 The date above the left hand door. 2016
Colin Wilson 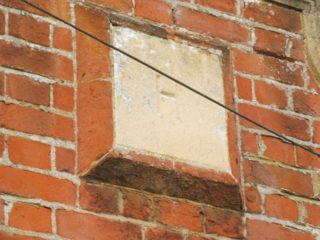 The stone above the right hand door, with the letter H. What does this refer to?
Colin Wilson 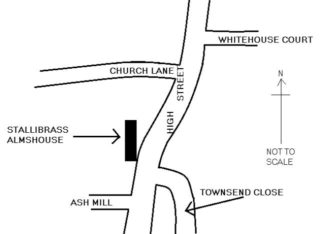 Sketch map showing the location of the Stallibrass almshouse.

You can’t always believe what’s written in stone. The dedication stone states these almshouses were erected by the great-grand-daughters of John Stallibrass, but according to Esther Dudding’s will, they were financed by her alone. Built in 1909, opened in 1910 and renovated in 1980, they were still in use as almshouses when visited in 2017.

Who was John Stallibrass?  Clutterbuck refers to John Stallibrass, of Barkway, who by will dated the 22nd of July 1818, directed his executors to pay money to the poor of Anstey and Barkway. He died in 1820.

The Herts & Cambs Reporter for 15 April 1910 p8 col 5 throws more light on this. The article describes the opening ceremony. It confirms their great grandfather had given money to the village in 1818. Moreover, it records that the other sisters, the Misses Hope, had died. Maybe that explains the H stone above the right hand door. This newspaper can be viewed on-line at https://www.britishnewspaperarchive.co.uk

The relevant documents at Hertfordshire Archives and Local Studies are stored under the reference DP/13/25/25. A extract of Esther Dudding’s will is attached, which provides useful information about the endowment, management and rules to be followed, hence is not referred to in this section.

The extracts below, from other documents in the same collection, shed some light on lawyers. While the solicitor does follow the rules exactly, as evinced by checking on Mrs Osborne’s eligibility and the correspondence about the District Nurse, there is the lovely pencilled comment about special pleading comment  where he’s trying to be as helpful as he can in the case of Mrs Seabrook’s eligibility. Much of the legal work for cash-strapped charities was carried out for free, but this does impact on lawyers’ ability to make a living. Even so, he was willing to arrange a service for a reduced fee.

Letter to Rev Stubbs 05 Jan 1925
Asks to be relieved of the necessity of doing all the legal work himself as he is not allowed to make a charge for it (being a trustee), he is busy and has other similar unpaid jobs. (Elsewhere he does comment that the Charity does have enough funds to pay for legal advice).

Letter to Rev Stubbs 18 Feb 1925
Notes he was planning to hand over the work of transferring securities to another firm, but was able to continue provided he did not make personal profit from the trust. He was willing to employ his firm to act, deducting one third (which would have been his share). This would be cheaper than employing another solicitor who would make the full charge.

Letter to Rev Stubbs 16 Apr 1926
Notes Stubbs is leaving Barkway. It would be impossible for a solicitor to go from London to Barkway weekly to pay the old ladies, so he asks if there is someone in the village who could deal with payments if a cheque was sent. Otherwise it would be impossible to get receipts from the tenants if they were paid directly.

2 Aug 1924  Letter to J J Balding
[The situation referred to here was that a room had been vacant for some time, the district nurse needed somewhere to live, and it was suggested the spare room at the almshouse could be suitable]. The Charity Commission may have been willing to make an additional scheme if necessary. ‘I suppose it is impossible to get the vacant almshouses occupied by a suitable person. 5/- a week is the limit we are allowed to pay any occupant. I see no reason why we should not raise our payments to the full 5/- each………. I hardly think that the Charity Commissioners would allow the District Nurse to occupy the vacant almshouses. In considering a scheme they want to get as near to the original scheme as possible, and to allow a nurse to occupy one of the almshouses would be a very long way off from the original scheme. The great thing is to find someone to occupy the vacant almshouse’.

21 Jan 1937  Letter to Mr Webb-Brown
A Miss Osborne wished to be admitted but was in receipt of poor relief so it was felt she would be disqualified. The solicitor felt that the Trustees had to follow the regulations strictly in such matters.

15 Feb 1937  Letter to Mr Webb-Brown
Steps have been taken to investigate Miss Osborne’s case. She is now properly qualified so can be admitted.
Reminds trustees they can pay no more than 5/- a week.

The Charity Commission has some references.
The Stallibrass Almshouse Charity (ref 233285) was registered on April 27th 1964. The governing documents are a will of 20th Sept 1912, along with schemes dated 22nd April 1966 and 21st Sept 1987. Currently income usually exceeds expenditure, but it’s certainly not a wealthy foundation.

The Esther Dudding Charity for the Poor (ref 233284), also known as Stallibrass Almshouses, was registered on 7th May 1964 but removed on 22nd May 2013 due to amalgamation.