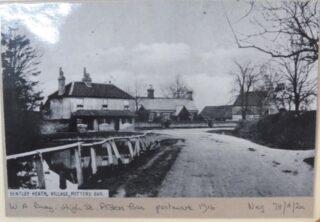 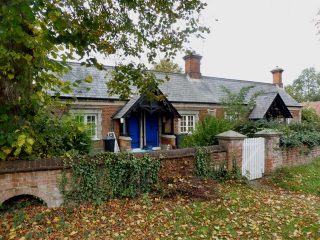 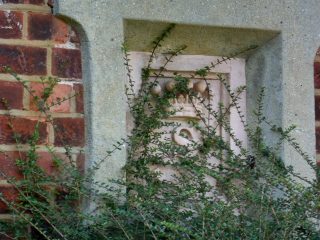 The emblem on the Bentley Heath almshouse. Feb 2017
Colin Wilson

It seems that George Byng, 2nd Earl Strafford, had some involvement in two almshouses. He purchased the site of the Brewers almshouse at Kitts End in 1856. The farm house built on the site still bears his emblem of a coronet above a letter S. In 1864 he built a block of 4 almshouses at Bentley Heath, which bear the same emblem. They were near the northern gates of his residence, Wrotham Park, and close to Trinity church. At the time Bentley Heath was in Middlesex, becoming part of Hertfordshire later.

George Byng, Earl of Strafford, is not to be confused with George Byng, Lord Aldenham, who built some almshouses at Elstree in 1844.

Born in 1806, George lived till the age of 80, dying in 1886. Following a military career he became involved in politics for the Whig party, rising to the level of Privy Counsellor. He succeeded to the title Earl of Strafford in 1860.

A 1975 article in Hertfordshire Countryside details improvements to properties owned by the Wrotham Park Estate Company. The almshouses are specifically mentioned, and a grant of £1000 per dwelling was obtained. The work involved a rear bedroom extension, structural repairs. plus wiring, plumbing and heating improvements. The frontages were retained.

The buildings still exist (as at 2020) and were granted listed building status in 1985 by Historic England.

HALS
DE/X1025/2/79/4. A postcard of Bentley Heath, showing the pond with the almshouses in the background. Date is about 1916.
MIS018 in the photograph collection.