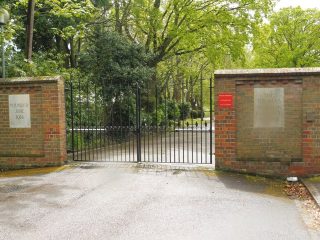 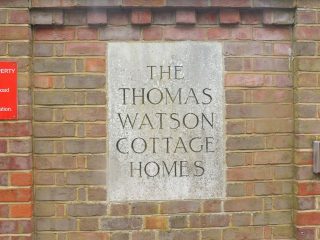 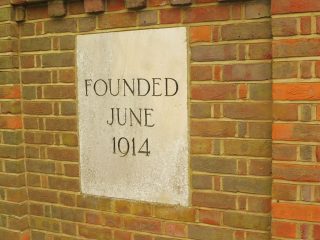 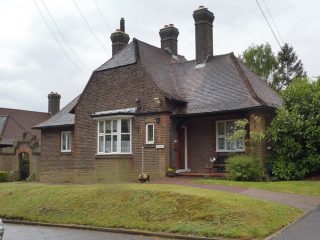 The warden's house at Thomas Watson Cottage Homes. It gives a taste of the style of other buildings. Jan 2017
Colin Wilson

This not so much an almshouse as a developing estate of almshouses, specifically for the benefit of those linked with the haulage industry. The reason for the link is that Thomas Watson, who died in 1910, headed up the firm of Sutton & Co. But it was not he but his two daughters, Annie and Florence, who founded the first almshouses in 1914 in his memory. They also made a significant bequest, amounting to about 4 million pounds in 2019. The family connection was still valid a century after the foundation as Jenny Harold was the chairperson. She was cousin to his great-great-grandchildren.

The almshouse group is tucked away at the end of Leecroft Road, peacefully secluded behind gates, but fairly close to the local shops and activities. The residents are free to come and go, but for safety they would normally let the warden know.

The more recent development of the estate is best summarised in the published accounts for 2019. They reveal that up to 10 flats were authorised in 1992, a further flat in 1996 and another 8 housing units in 2010. This is in addition to significant refurbishment in 1992. Contrary to those figures, a 2014 article by The Barnet Society reported it comprises eight bungalows, individual and semi-detached (for 11 singles and couples plus warden) on three sides of an open-ended square. The hall, for dining and social activities, is in the centre of the main side. However, the article does then refer to Colgate Court (1996) and Jubilee Cottages (2011). The 1935 OS map should throw further light on this; it suggests 10 dwellings plus a building by the gates. At any rate, reports are that the buildings are well appointed. A visit in 2017 (understandably I could not gain access without prior arrangement, but I did have a quick chat with the warden) showed the warden’s house was then at the main gate. The buildings are sited around a lawn with flower beds and trees, with a sundial in the middle. The site is behind security gates.

As well as the dwellings there is a communal hall in which activities take place, assisted by an events manager. There are a few memorial stones round the site, including the original dedication stone on the hall wall, a World War I memorial from the Company’s offices and a centenary commemoration stone.

The beneficiaries were accepted from priority lists, staring with ex Sutton employees and broadening in stages to anyone involved in the carriage of freight.. Length of service was another consideration. In 1991 qualification was extended to spouses.

Funding is largely from the weekly maintenance contributions, which averaged at just over £7000 each in 2019. It does not rely on volunteers or gifts in kind.

Unfortunately the minutes books were lost in a fire at the Company’s offices during World War II.

The homes are affiliated with The Almshouse Association, and registered with the Charity Commission.

https://www.barnetsociety.org.uk/component/k2/the-generosity-of-barnet-s-benefactors. The article by Nick Jones includes notes by Robin Bishop and a few photographs.

https://www.barnetsociety.org.uk/component/k2/milestone-for-the-almshouses is a further article by Nick Jones relating the 2014 centenary celebrations.