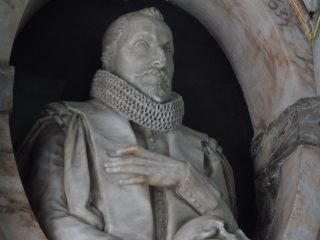 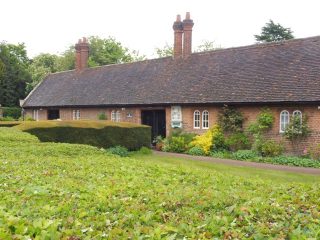 Wilbraham's almshouse from the Green. The dedication stone is below the chimney. Jan 2017
Colin Wilson 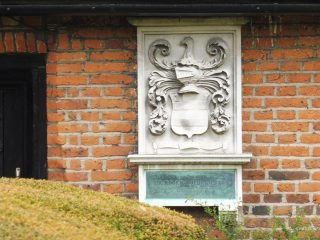 The coat of arms and dedication plaque. Jan 2017
Colin Wilson 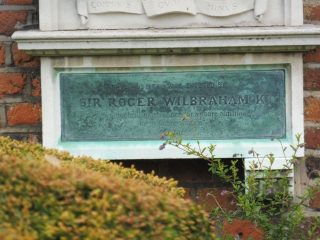 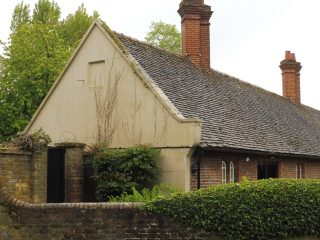 The end of Wilbraham's almshouse. What was the square? A vent, decoration, or a former inscription? Jan 2017
Colin Wilson

These almshouse have been in use for over four centuries. They are built in the style that most people would recognise as almshouses, similar to Saunders’ almshouse at Flamstead and Pemberton’s almshouse at St Albans.

Roger Wilbraham built almshouses at Nantwich where he was born and at Monken Hadley where he had a country residence. Following his legal training at Cambridge, he rose to the rank of solicitor general, mainly in Ireland, in the reign of Elizabeth I and was knighted by James I in 1603. James also gave him the gateway of the Priory of St John of Jerusalem, Clerkenwell, as a town residence. Sir Roger died in 1616, at the age of 63. He and his wife are buried at Monken Hadley. Their memorial is still in the church, although moved from its original location.

The Monken Hadley almshouse, known as a hospital, was built in 1612 according to the plaque on the front wall. Some sources cite 1616, but it was built before his will dated 1615. There was some endowment from the rents and profits from two houses in Clerkenwell. Others provided further endowments over the years.

The construction was of small bricks, only 5 bricks and 5 joints per 13” (though they are larger than those used in the church). A picture dating from 1794 is held at London Metropolitan Archives. The buildings were extended to the rear in 1815. LMA has a photo dated 1965. They are now listed by Historic England ref 1078821, as of 1949.

It was provided for six decayed housekeepers, all women, called Wilbraham’s Hospitallers in his will. An 1899 article cites the qualifications as ‘poor women of good character and who shall not during a period of five years at least should not have received poor law relief’. In 1907 each almswoman received £1 17s 6d a month, which amounted to £135 per year.

Rates have always been unpopular. In the late 19th and early 20th century the trustees were summonsed for not payment. Some appeals over the years were upheld, some were not. The charity at the time had little or no money to spare. Income and expenditure almost balanced at about £130, with a very small surplus, though this did not allow for repairs. The argument that they would have less to spend on the residents was not well accepted as anyone who paid rates would also have less money. The more interesting argument that the charity saved the local authority about the same as they paid in rates was listened to with more sympathy. If the almshouse was closed, the residents would have been transferred to the workhouse, thus involving a cost on the rates.

The issue of drainage was reported in the newspapers. There were two blocks of houses containing six people each, and those on Hadley Green were supplied with closet and cesspool, the overflow draining across Hadley Common. The other block was not so completely provided for, but the committee thought there was no necessity to interfere with them.

The Charity Commissioners had adopted a new scheme for governing the almshouses. One requirement was that 4 of the trustees should be representatives. The question arose as to whether ex officio officials were the best option, but it was decided that nothing adverse had been shown. However, one of the officers, Mr Venables, was required to resign in 1891 because he had an interest in some land which belonged to the almshouse. The matter was referred to the Charity Commissioners who agreed he was not eligible unless he gave up his rights to the land.

The case of 82 year old Martha Green is interesting as it throws some light on what may happen to those who became ill. She had become paralysed on one side and needed constant care. Two other inmates had cared for her but were now worn out. An application was made for her to be transferred to the Barnet hospital, or failing that the workhouse, as the charity could not afford to pay a nurse. Ideas discussed included leaving her room vacant so her benefit could still be paid or the Board of Guardians paying for a nurse. Previous residents had been sent to the infirmary or the workhouse. Near the end of the discussion was the comment that she had forfeited her right to stay in the almshouse as she was unable to keep her rooms clean and tidy – it sounds like a desperation argument. In the end the vote was divided so status quo was to be maintained. By 1902 there was a comment that the trustees had to provide medical attention, but to what extent is not recorded.

An extended biography of Sir Roger Wilbraham can be found at http://www.historyofparliamentonline.org/volume/1604-1629/member/wilbraham-sir-roger-1553-1616

Newspaper articles can be viewed on-line at British Newspaper Archive