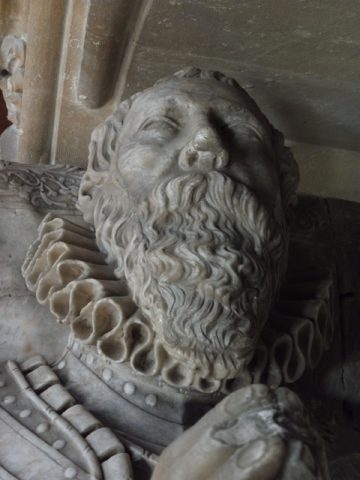 Sir George Knighton as depicted on his tomb. 2018
Colin Wilson 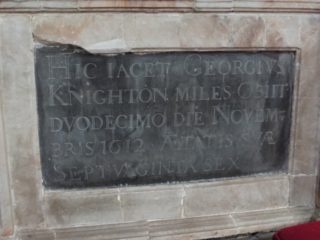 George Knighton's epitaph on the front of his tomb. 2018
Colin Wilson 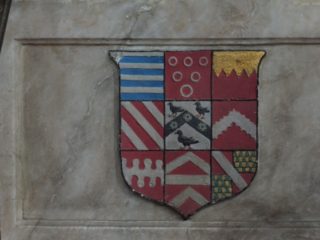 George Knighton's arms as shown on his tomb. 2018
Colin Wilson 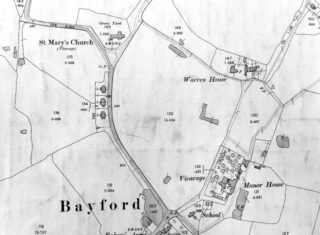 Bayford as shown on 1898 OS map XXXVI.6. The almshouses were probably in the area of Warren House
Courtesy of Hertfordshire Archives and Local Studies

There is a report that Sir George Knighton had leanings towards ‘the old faith’ of Roman Catholicism, which could be dangerous in Elizabethan times. He died in 1612 age 76. His tomb in St Mary’s church, Bayford has survived despite the church being rebuilt twice. His will dated 1607 and proved in 1613 is believed to be at the National Archives, Kew (ref PROB 11/122/492).

He wanted his wife Susan, and others who may live in his main house, to keep the almshouses in the same way as they were during his lifetime. Maintenance was catered for by a rent charge on his house. He gave 10s. a year for the poor, to be distributed each year on the anniversary of his funeral.

A terrier (land survey) of 1712,  mentions that “The west and south side of the churchyard fenced with poles by the Incumbent; the east and north side fenced with rayles by the Churchwardens together with the almshouses; the body of Church repayred by the Church wardens.” This reference is quoted in an article published in The Herts Advertiser for 30 December 1893.

In time the almshouses fell into ruin and, it seems, were forgotten by the community. Two letters were published in the Hertfordshire Mercury and Reformer in 1889, but at face value provide different answers.

2nd March 1889: ‘Referring to the query respecting a charity left by Sir George Knighton for the benefit of the above parish in 1507, the matter in question having been submitted to the judgement of the Charity Commissioners in 1863, and no record of any almshouse having existed in the parish as far back as the middle of the last century [ed: i.e. about 1750] being obtainable, the rent-charge was then commuted by them by the transfer of the sum of £33 6s 8d consols  in the names of the official trustees, by whom the dividends are received and periodically made use of for the purposes mentioned in the charity, and conformably to the instructions of the Charity Commissioners; but not as most improperly stated paid at any time “by Mr Baker to the overseers of the poor, by whom it has been carried in aid of the poor rates in ignorance of its proper application” – W R Baker.

The Overseers of the parish also write to say that “they have not received any money at any time from the Bayfordbury estate from Sir George Knighton’s charity towards the rates, or gifts to the poor of any kind”.

9th March 1889. Respecting the almshouses at Bayford, there are persons living who remember four old men and two old women inhabiting them about the year 1820, and from what I can hear the houses are still standing at the bottom end of what is known as Bayford Green. – A H

According to Victoria County History (1902) page 423 the annuities were redeemed in 1863 by the transfer to the official trustees of £33 6s. 8d. consols, who also hold a further sum of £30 16s. 3d. consols, arising from accumulations of income. The dividends on the stock, amounting to £1 12s. yearly, were distributed to the poor periodically.

The History and Antiquities of the County of Hertford, by Robert Clutterbuck
Vol 2 p44
Pub John Nichols & Son 1821