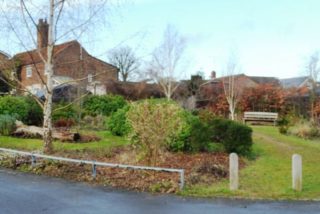 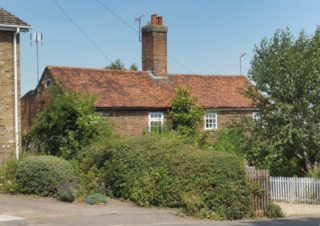 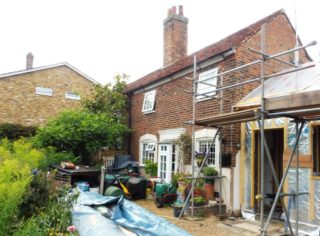 The right hand end of the existing building. 2019
Colin Wilson 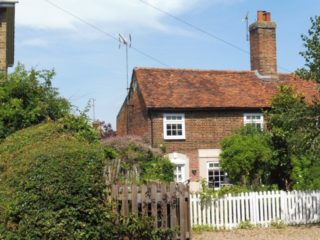 The left hand end of the existing buildings. The other part of the almshouse was built against the end wall. 2019
Colin Wilson 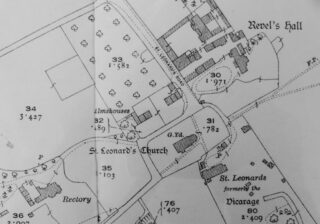 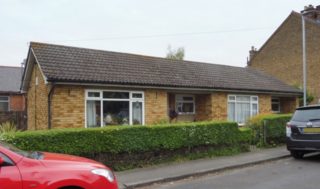 The almshouses in Tower Street. The date stone is on the end of the building. 2018
Colin Wilson 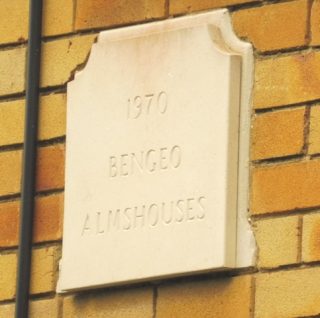 The datestone on the Tower Street almshouses. 2018
Colin Wilson

We may need to go back to Elizabethan times for the foundation of these almshouses. Victoria County History simply says the origin of the Bengeo almshouses is unknown. Alan Thomson reports that, in the 1632-3 churchwardens’ accounts, part of the poor rate was used for rent for 3 poor widows’ houses and repairing the almshouse. ‘Repair’ indicates they had existed for some time at that date.  Chauncy and Clutterbuck do not mention them.

The Bengeo Vestry Book vol 3 records that almshouses were built in 1833. Rev J Byde (vicar) provided the site in exchange for land on which the old house stood. This suggests that a new building was erected on a new site. If so, I have not located the original site. The cost of building was raised by subscription.

Cussans, Wilson and the Vestry Book all cite the provision as being for four widows, while VCH cites 6 widows. The likelihood is that VCH simply combined the parish and the Deedes almshouses.

The requirement was that they were widows of the parish without children (or, as the Vestry Book says, aged widows free of all encumbrance) and not receiving poor relief. The parishioners and the rector alternated in the right to appoint residents. It was proposed at the meeting of 28th November 1877 that ‘the widow [Day] and the widow [Darton] be allowed to occupy the two vacant Alms Houses during good Behaviour, & on the distinct understanding that they do not admit any one to live or sleep in the apartment’.

An instance of bad behaviour was reported in the newspaper in 1859. To quote the article, “Sarah White was charged with threatening to set fire to her dwelling-house, and with threatening to do grievous bodily harm to others. Defendant is an inmate of Bengeo alms-house; and three aged women who also live there, Mrs Parker, Mrs Wren and Mrs Fawkes, deposed that she was continually threatening  to set fire to the place and burn them all up; she also said she would split their skulls open , and tear their plucks out; she had crushed Mrs Wren’s hand in the door-way, had struck her and gone into her bed-room in the middle of the night: all the witnesses said they were afraid of her. On being called on for the defence, she first said she was very deaf, and couldn’t hear what was said: she next denied saying any of the words imputed. The witnesses said she was not deaf. After consultation, Mr Mills asked her if she would go into the union house, and she said she was willing. Mr Mills said if she promised to go to the workhouse today, they would not send her to goal; she agreed to this but soon after came into the room again, and wanted to kneel down to beg she might not go into the union; she fell on the floor and rolled over, and behaved most grotesquely. Mr Mills ordered a bucket of water to be sent for; on its arrival she sat up and became suddenly composed. She was sent to prison for a week as she refused to go to the workhouse”.

A photograph dated 1941 exists in Hertford Museum (ref HETFM6037.425. ‘Old cottages opposite St Leonard’s Church, Bengeo, 25th June 1941’). It shows a two-storeyed brick building in an L shape. The part now demolished sported three chimney stacks. Peter Ruffles includes photos in his book showing the almshouses as they were and after some had been demolished, with two remaining. The tithe map for 1842 shows buildings parallel to the church, suggesting the existing buildings are the Bengeo almshouses, the Deedes almshouses having been demolished. However, Ann Grumble and others are listed as the occupiers of plot 530, with plot 531occupied by a man and plot 532 occupied by the parish of Bengeo.

According to conveyancing documents kindly shown to me by the present owners, the property was sold in about 1962. This is not recorded in the Vestry minutes for that time.

A new building was erected in Tower Street in 1970. The name stone simply reads ‘1970 Bengeo Almshouses’, although the Deedes almshouses were amalgamated by then.

Hertfordshire – a Caring County? Ed Stephen King and Gillian Gear
The relevant article is by Alan Thomson ‘Caring for the Poor in East Hertfordshire’ p117
Pub Hertfordshire University Press 2013 ISBN 978-1-909291-12-6 (Note: this book is a collection of articles)

Herts Guardian, Agricultural Journal, and General Advertiser Saturday 19 March 1859  Page: 5 col 2
This article can be accessed on-line at the British Newspaper Archives, https://www.britishnewspaperarchive.co.uk, as at July 2019, and the transcription has been made from that source.