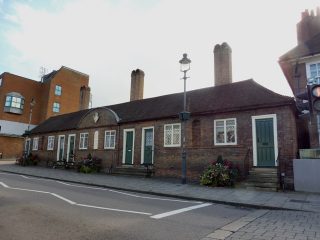 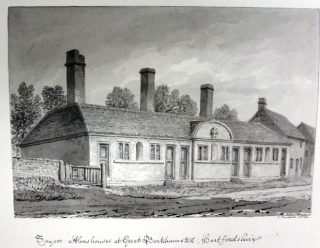 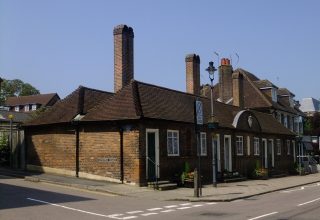 John Sayer's almshouse. The end on the corner of Cowper Road. The Heritage Trail sign can just be seen at the top right of the wall. 2016
Colin Wilson 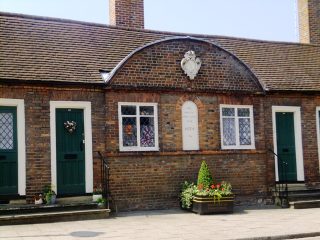 The centre section of the almshouses, showing the location of the datestone and Sayer's badge. 2016
Colin Wilson 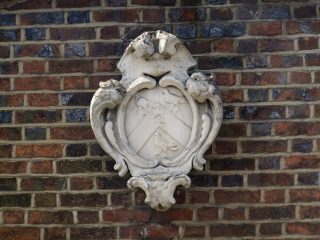 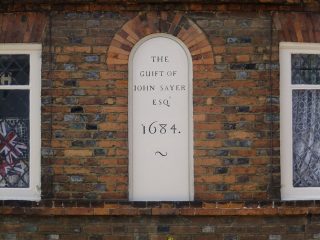 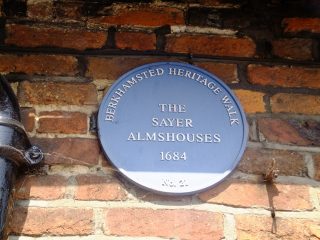 The Heritage Trail sign on the end of the almshouse. 2016
Colin Wilson

One look at this building and you immediately recognise it as an almshouse. It’s a strange mixture of plain and decorated, but very attractive. It’s situated on the main road, not hidden away in a back street.

1660 saw the restoration of the monarchy with Charles II, meaning that John Sayer, who had been loyal to him, could also return. He became the King’s head cook. Samuel Pepys records enjoying some of the King’s food, a hearty breakfast, with him. By 1662 John had possession of Berkhampstead Place.

Soon before his death in 1682, aged 63, John set up a fund of £1000 for erecting some almshouses in Berkhamsted. He did not live long enough to finalise the details; his wife Mary dealt with implementing his wishes. The building cost £269, the balance being invested. She outlived John by 30 years.

The endowment consisted of a rent charge of some land in Chilton and income from an orchard behind the almshouse. Further endowments came from Martha Deere (1784), George and Elizabeth Nugent (1830) and John Finch (1861).

The beneficiaries were 6 poor widows, aged over 55 and constant frequenters of the Church of England. This was later modified to Christians, with a preference for the Church of England, and single women. They had to have lived in Berkhamsted for ten years and be at least 55 years of age. Residential requirements have been widened to links with Berkhamsted and the area. New residents could only be appointed at the Feast of the Annunciation.

Some rules laid on the residents have been recorded in an article in Hertfordshire Countryside. Each widow was given 8 shillings a month, and a cloth gown every three years. Only one widow could be absent at any one time, and not for longer than a month in any year. They had to attend church every Sunday, walking there in twos (rather like a class of schoolchildren nowadays). Failure to do so meant a threepence fine; regular failure could lead to permanent exclusion. The youngest widow had to look after the sick, and open and unlock.the gates at specific times. Failure would lead to a two shilling fine, with possible permanent exclusion after two admonishments.

Accommodation was 12 rooms. At a later date the provision for 6 widows was reduced to the current 4, though there are still 6 doors to the road. Cussans notes that the 6 widows each received 4s 4d a week from the endowments.

According to the Housing Care website, the current accommodation is a sitting room about 4m square, a bedroom alcove and kitchen each about 4m by 2m, and a bathroom about 2.5m by 2m. Heating is by radiators from a gas boiler. The buildings were renovated in 1965. The management staff are non-resident, but there is a Careline facility.

After over 300 years it still fills its original purpose. However there seem to be few references in historical documents or newspapers. It has just quietly and almost anonymously fulfilled its purpose. The John Sayer Almshouse Charity is still active (as at 2020), ref 208191 for the Charity Commission. A number of charities are linked with it, although only the John Sayer Almshouse Charity 208191-2 is specifically aimed at the almshouses. The almshouses are also affiliated to the Almshouse Association.

The buildings were listed by Historic England in 1950, grade II.

Note: At the time of writing (Oct 2020) it was not possible to access these documents due to the Covid restrictions.

http://www.stpetersberkhamsted.org.uk/heritage/memorials includes details of Sayer’s memorial inscription. It is located in the Lady Chapel, on the north east corner of the church next to the Sanctuary.