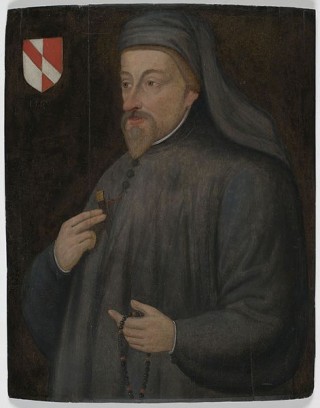 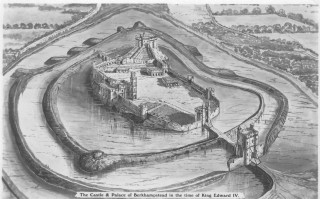 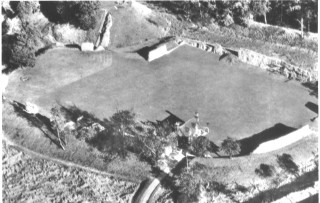 Hertfordshire has many literary associations, from Dickens and Trollope to George Bernard Shaw, and from Francis Bacon to E. M. Forster, but one of the most illustrious (though admittedly also one of the most tenuous) is the great 14th century poet Geoffrey Chaucer. Chaucer is often described as the first major figure in English literature – possibly a slight exaggeration*, but there’s no denying his importance.

Chaucer was born about 1343 in London to an affluent middle-class family. His father, a wine-merchant, appears to have been well connected, and Chaucer was made page to the Countess of Ulster, daughter-in-law to Edward III. This began a lifelong connection with the royal family which included marrying the sister-in-law of John of Gaunt, Duke of Lancaster and father of Henry IV, and extensive employment in various capacities by Richard II.

Chaucer travelled extensively on the continent, taking part in battles of the Hundred Years War – including one where he was captured and had to be ransomed – and going on diplomatic missions to Italy. On these, he may have met the poets Petrarch and Boccaccio, the latter of whom was a major influence on several of his works, including The Canterbury Tales.

In 1389, Chaucer was appointed Clerk of the King’s Works. This involved supervising the maintenance of royal properties, and one of the more important properties that came under Chaucer’s care was Berkhampsted Castle. It’s not recorded whether and how often he visited the castle, but it’s not unlikely that he would have spent time there. Berkhampsted was, after all, convenient to London and a luxurious place, so it would have been one his less onerous tasks.

It has been suggested, in fact, that the Doctor of Phisick from The Canterbury Tales was based on a friend called John of Gaddesden, from Little Gaddesden. If this is true, it would suggest that Chaucer did spend time in Hertfordshire, perhaps during official visits to Berkhampsted.

Chaucer appears to have died in 1400, although the date and the circumstances aren’t known. It was just a year after his royal patron Richard II was overthrown and replaced by Henry IV, and it’s been suggested, though without any real evidence, that Chaucer was “purged” by the new regime.

Whatever the circumstances of his death, Chaucer’s descendants were highly successful for several generations. His granddaughter married the Duke of Suffolk, and their grandson was John de la Pole, 1st Earl of Lincoln, who claimed the throne after the death of Richard III and led the rebellion in the name of the pretender Lambert Simnell. Confusingly, the de la Poles had no connection with the Poles of Ware, although both were part of the Yorkist royal family.

Nevertheless, Chaucer’s true legacy was his literary work, especially The Canterbury Tales, which was one of the first books printed in England and is regarded as the first great work of modern English literature. Chaucer was buried in Westminster Abbey, and his monument there became a magnet for memorials to other writers, eventually becoming Poets’ Corner.

Chaucer’s Hertfordshire connections may be slight and circumstantial, but there’s enough reason to celebrate this genius as another of the county’s literary greats.

* It would be more accurate to call Chaucer the first major named figure. Earlier great writers, such as the Beowulf Poet, the Maldon Poet and the Gawain Poet, are anonymous, although a fair amount is known about the Gawain Poet – just not his name.