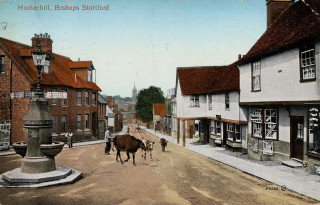 Esterteferd first appears in the Domesday book of 1086. The origin of the name is uncertain but it has been suggested it may derive from a family called “Steorta” who ruled the vicinity during Saxon times. In 1060 the town and its castle were sold to the Bishops of London and it was then known as “Bishops Estereferd ” and eventually Bishop’s Stortford. The castle mound is the only obvious reminder of Stortford’s castle.

Bishops Stortford developed as a thriving market town, boasting a large number of inns, as the town was a staging post on the mail coach routes between London – Cambridge and London – Newmarket . One of the oldest town buildings is the 15th  Century George Hotel in North Street , which was visited by King Charles I in 1629. The stables of the Inn were on the first floor of 3 North Street , and horses could be seen clearly looking out from the window. The Inns were supplied by the malting industry which was well established by 1636 and the pervading smell of “a well baked cake” permeated the town air.

Unusually the River Stort is named after the town, who’s prosperity was further enhanced by the opening of the Stort to navigation in 1769. Transport links further improved with the opening of a railway line in 1842 which cemented Bishops Stortford’s importance as a market town and as a commuter area to London.

Hockrill crossroads was a busy intersection between Colchester to Braughing and the London to Newmarket roads. George Thickings, dairyman of Castle Street herded his cows twice a day to the fields by All Saints Church. The fountain seen in this image can now be found in the Castle gardens.