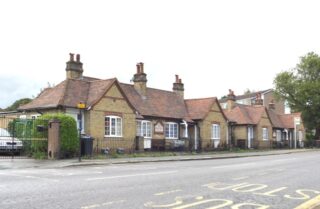 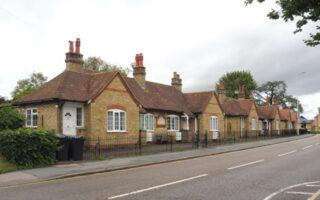 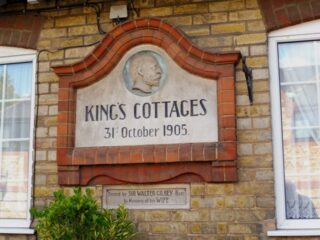 One of the plaques on the Gilbey almshouses. Note the date. It is not known why this date was chosen. Feb 2017
Colin Wilson 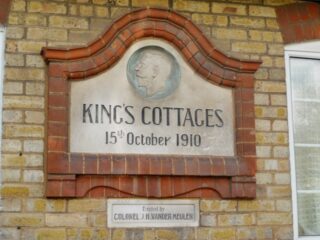 One of the Vander-Meulen plaques. Note the king's head is different from the earlier plaques. Feb 2017
Colin Wilson 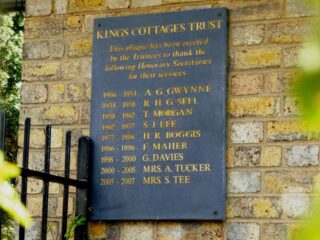 The plaque listing the secretaries. Later moved from the end of No 9 to the front of No 13. Feb 2017.
Colin Wilson 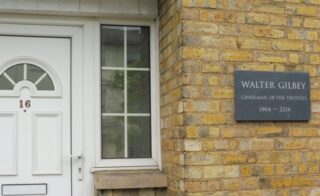 The plaque in memory of Walter Gilbey. Aug 2020
Colin Wilson

Edward VII passed along South Street on the day the almshouse foundations were laid, and allowed them to be named King’s Cottages. They were founded in 1906 by Sir Walter Gilbey of Elsenham, the gin magnate, in memory of his wife. Members of the Vander-Meulen family added further buildings over the next decade. One of the stipulations was that there should always be a descendent of Gilbey as one of the trustees.

Beneficiaries were to be aged over 60 (now reduced to 55) and to have lived in Thorley or Bishops Stortford for at least 20 years. Residents of Thorley were preferred for the Admiral Vander-Meulen property as it was instituted in memory of his father, the rector of Thorley.

The properties were a mixture of single dwellings for women, and doubles for a husband and wife. The living space was small. The living room was 12ft by 9ft with a bed recess of 9ft by 6ft for single dwellings, and a little larger for double. The amenities were improved over the years, with oil lighting giving way to electric. Cooking and heating ranges were installed. With further improvements the cottages are now up to date, and from the outside look very attractive and well kept.

In the mid 1960s an alarm system was added when a resident warden, living in one of the cottages, was appointed. One of the warden’s duties was to visit each cottage on a daily basis. However, care was not provided; residents had to be independent or to arrange for some sort of care facility.

The rent was 9d for a double, 6d for a single dwelling. Should a spouse die, the survivor could continue in the cottage, still paying the rent as for a couple until such time as a single cottage became available. As is to be expected, rents did rise over time. Sub-letting was not permitted.

As is the case with other almshouses, fortunes and conditions varied over the years. Sir Walter provided some funds at the outset, and others made contributions. By the 1930s funds were exhausted, but some bequests and donations saved the day. In time various grants were a great help. By 1960 the dwellings were deemed as sub-standard for habitation. In 1964 the foundation was registered  with the Charity Commission ref 232955, and matters were stabilised by about 1970. The Henry Charles Cook charity was also set up in 1964 for the maintenance of the almshouses. The accounts filed in 2019 show that the charity seems to be stable, with income a little higher than expenditure. Mr Micawber would understand the 1930s situation and approve of the present.

The institution is also affiliated to the Almshouse Association.

With 20 dwellings in use for more than a century it is no surprise there were a couple of unfortunate incidents – but there were very few reported. One of the wardens had to be persuaded to leave as she wanted a man to live with her (this would have broken the sub-letting rule), a couple of residents caused a little bother, and a newspaper reported in 2018 that one of the dwellings had to be sealed off because of drugs-related activity. In other words life seems to have passed peacefully for most people for most of the time.

The minutes were transferred to the keeping of the Bishops Stortford Local History Museum in 1999. A booklet about the almshouses was published in 2006, the centenary year. This publication includes a history of the almshouses, notes about the founders, the contract with the builders and the tenancy agreement. It has been included in Paul Ailey’s article at http://www.stortfordhistory.co.uk/guide13/south-street/