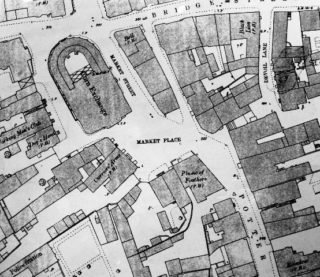 Bishops Stortford Market Place. Pilston's almshouse was probably somewhere to the east of the Plume of Feathers
OS 1:500 map 1880. Courtesy of Hertfordshire Archives and Local Studies 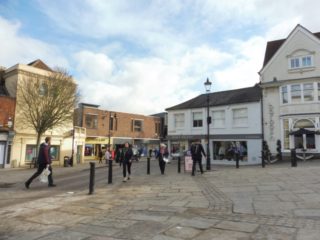 The south east corner of Market Place looking from the Corn Exchange. The original almshouse was in this area. 2019
Colin Wilson 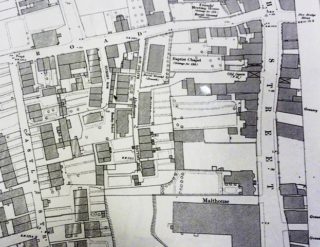 The later site of Pilston's almshouse as annotated in the centre of this image. Newtown Road is across the top, while South Street runs north-south on the right.
OS map 1901. Courtesy of Hertfordshire Archives and Local Studies. 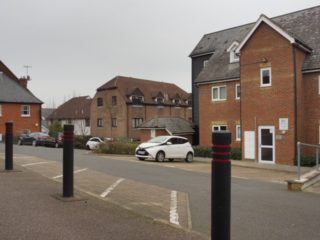 The later site of Pilston's almshouse, probably where the white chevrons are behind the bollards. The gardens were probably where the car park is now located. The building to the extreme left is the rear of the former Baptist church. 2018
Colin Wilson

The history of this establishment raises a number of questions.

According to Henry Chauncy, there were benefactions before the time of Henry VI. In 1433 Thomas Halsey passed property on to John Leventhorpe and his descendents, who passed it on to Richard Pilston of Great Bardfield.

An Act of 1531 (in the time of Henry VIII) ruled that every parish had to keep its poor by means of charitable alms – money given voluntarily by those most able to afford it. Churchwardens’ accounts of 1547 show that William Norfolke paid 4d. (2p) rent ‘for Almshouse gardyn for half a yere’. The almshouse mentioned was built for the poor of the town on the south side of the market place.

In 1572/3, the 15th year of Elizabeth I’s reign, Richard Pylston gave two almshouses in Peter’s Street, a stall in the Fish-Row, a meadow called Church Mead in Thorley  containing one acre, and the yearly rent of 11s 6d and Cummin issuing out of certain lands and tenements in Stortford, called Bevens and Leventhorpe’s Rents, to the poor dwelling in the almshouses. Chauncy suggested it was originally the gift of Bever and Leventhorpe, and that Richard Pylston’s name was used as the heir of the surviving trustee. In other words, the almshouse may have been the one mentioned in the 1547 accounts but named after Pilston in 1572 as the trustee at the time it was officially left to the church.

An article in Universal British Directory 1791 states the almshouses were in Potter Street.

Peter’s Street does not seem to appear in Bishops Stortford maps, but Potter Street heads south from the south east corner of Market Square. Shown as such in the OS map Essex XXII.15 (1st ed/rev 1862-96), part of it is named Market Street. This agrees with the above note that the almshouses were on the south side of the market and the reference to fish market shops used as residences. To further confuse the issue, a cutting collected by Gerish refers to Porter’s Street. Moreover, the local church is St Michael’s, not St Peter’s. Care needs to be taken as the extents of Market Street, Potter Street and South Street varied over time.

Maybe the almshouse, consisting then of two tenements, was at the northern end of Peter’s Street (alias Potter Street, later Market Street?).

Jacqueline Cooper notes that in the sixteenth century two Fish Market shops had been left by Richard Pilston to the church and poor to enable ‘the most honestest of the said poorest sort to have their dwellings in the said two tenements’ – a sort of almshouse charity. But the commissioners found that the shops had been sold, probably in 1675, by the parish officers for ‘a valuable summe of moneye and ye moneye imbezelled or misemployed’. However, had they been sold, they could not have been exchanged in 1821, about 150 years later. Either they would not have existed or would have had new owners. Unverifiable explanations could be that other shops used as a source of income, not the almshouses, were sold or that the poor lived above the shops, the shops being sold or leased while the upper floors were kept as almshouses.

According to Victoria County History, five almshouses at New Town were acquired by exchange under the Inclosure Act 1821 for the two tenements originally given by Richard Pilston. The income, along with some other charities combined into the Poors Estate, was applied in the upkeep of the almshouses, which were inhabited by poor aged women in receipt of parochial relief, and in the distribution of coal to the poor. Note the different requirements from the Market almshouses. They are shown in the OS map Essex XXII.15 (1st ed/rev 1862-96) as being to the south of the Baptist church.  The site has been referred to as Chapel Lane but more frequently Chapel Row. The site is now (2018) Archers Place.

An auction notice by Sworders dated 1871 states that the 4 buildings for sale were near the almshouses, indicating the almshouses were near the property for sale. Not too helpful at first sight, but the OS map Hertfordshire XXIII.10 (Bishops Stortford; Great Hallingbury; Thorley), revised 1896, published 1898 does indeed show two blocks of 4 buildings near a block of 5, indicating the almshouses are on the site just south of the Baptist church. Sometimes it is not clear from the OS labels exactly which building is referred to.

The 1901 OS map shows the location more clearly, and includes what look like gardens for the almshouses. They are also shown on the 1915 (pub 1921) revision, and on the 1939 (pub 1947) editions, by which time the adjacent block of 4 had been removed, indicating the site had been reviewed.

Just a couple of references have been found in the newspapers. Widow Peacock, who was well connected in the town, died on New Year’s Eve 1888. While it was suspected she had money, none was found.  By 19th January Mrs Tyler, of South Street, had obtained the vacant accommodation. It was in 1903 that Mrs Parkins, then aged 89, suffered a stroke. Fortunately Mrs Marshall Taylor  was visiting. Unable to get a reply, she summoned the police who broke in and found her just in time.

Newspaper articles in 1937  refer to the Chapel Row almshouses. There were inquiries as to their condition in 1937, when there was an order in force that the Chapel Row almshouses were not to be relet. A suggestion was put forward by Mr Harris, a trustee of the Kings Cottages almshouses, to use £200 of the Coronation Commemoration Fund as a nucleus to pay for replacements. Twelve houses would cost about £3000. It does not seem that the new almshouses were ever built.

Documents held at Hertfordshire Archives and Local Studies
Two Almshouses in Peter’s Street, plus various other charities, by Gerish
Date: nd [1895 – 1915]. This is a collection of cuttings.
Document reference: DE/Gr/18/1/13

Small Poor’s Rentals 1784 – 1822
Description: Stated to be called Bever’s and Leventhorpe’s rents and anciently the gifts of Richard Pilston, 1784 – 1796; 1822. The money was collected by the overseer and applied in the same way as the Great Poor’s Rental. Original bundle. It includes references to the workhouse but not to an almshouse.
Document Reference: DP/21/25/9