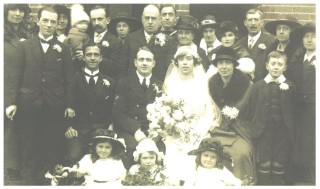 This wedding took place in Bishop’s Stortford in December 1919.

The groom was the youngest son of Thomas and Emily Mole [nee Hutchin] who are standing behind him. Between them is another son Joseph, and to their left the man with the baby and wife, is their son Thomas, who is the father of the bridesmaid on the left. The bridesmaid on the right is Dorothy Plastow, daughter of Charles’s sister Emily Plastow [nee Mole]. She is on the right of the photo with her husband Ernest and older children Margaret and Thomas.

The middle bridesmaid and the lady next to the bride are, I think, her relatives.

Can anyone identify the two men on the left of the picture, or any of the other women?

The Mole family originally came from the Therfield/Buckland area.

The Hutchin family moved into BIshop’s Stortford from Albury

The Plastow family had lived in the  Lea Valley since the late 1700s.

Before that they were in Ardley.