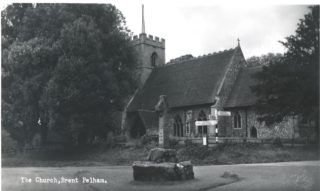 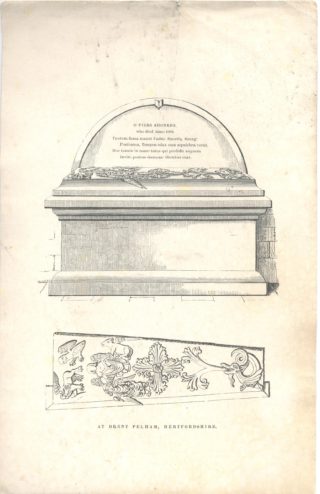 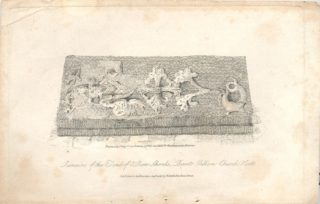 In a recess in the north wall of the nave in St Mary’s Church, Brent Pelham, is an elaborate ancient tomb (see images below). Its black marble bears many symbols, including those of the four Evangelists, and also a large cross thrust into the jaws of a dragon. The 16th century Latin inscription has been translated as:

Nothing of Cadmus* nor St. George, those names
Of great renown, survives them but their fames:
Time was so sharp set as to make no Bones
Of theirs, nor of their monumental Stones.
But Shonks, one serpent kills, t’other defies,
And in this wall, as in a fortress lies.

The inscription refers to the legend of Piers Shonks, Lord of Pelham, who slew the dragon of Brent Pelham. This dragon lurked in a cave beneath the roots of an ancient yew tree that stood in fields outside the village, terrorising the neighbourhood. Piers, who lived in a moated manor house whose ruins are still referred to as Shonkes, vowed to rid the village of the monster.

Both a giant and a great hunter, Piers set out fully armed and supported only by a servant and three hounds. These hounds accompanied him on his hunts and were rumoured to be winged because of their speed. The fight was long and dreadful, but at length Piers thrust his spear down the dragon’s throat – a mortal wound.

His troubles didn’t end there, though. The Devil now appeared and swore vengeance on the slayer of his favourite monster, vowing that Piers wouldn’t escape his clutches after death, whether he were buried inside or outside the church. He didn’t get his way, though. When Piers felt death approaching, many years later, he called for his bow and fired a last arrow, which hit the north wall of the church. It was there that his tomb was built, within the wall – neither inside the church nor outside.

Death didn’t stop Piers Shonks from protecting his people from malefactors, and they didn’t have to be draconian. A story tells about a man called Jack O’ Pelham, who made off with a stolen faggot. He’d almost got his stolen property home when the ghost of Piers Shonks appeared before him. Jack fainted from fright, and thereafter avoided doing anything to arouse the hero’s ire a second time.

So, if you’re a human or a dragon who’s contemplating mischief in Brent Pelham or the countryside around – beware the vengeance of Piers Shonks the Dragon Slayer.

More information about this and many other Hertfordshire legends can be found in Tales of Old Hertfordshire by Doris Jones-Baker, 1987, Countryside Books

* A Greek hero, Cadmus killed a dragon before founding the city of Thebes.