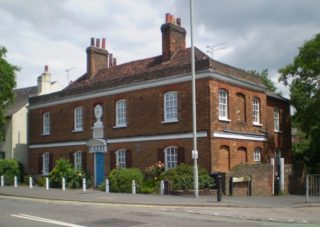 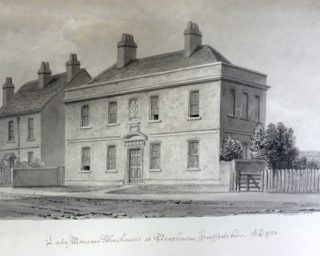 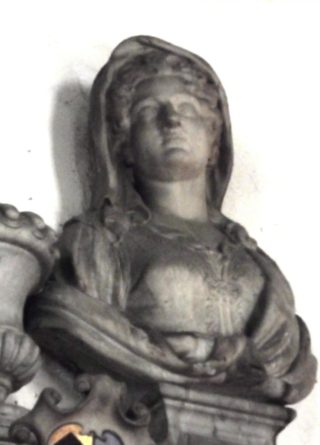 Laetitia Monson as depicted on her memorial in St Augustine's church. 2017
Colin Wilson 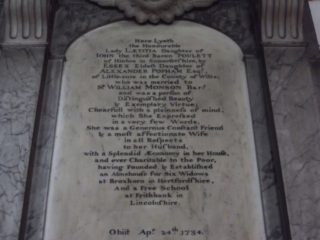 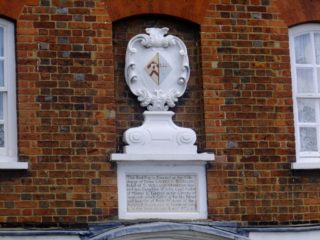 The dedication on the front of the almshouse. 2017
Colin Wilson 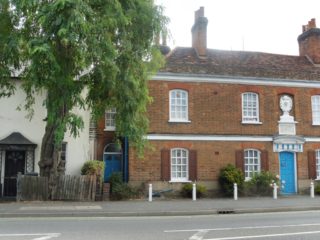 The almshouse northern end. The small blue door at the left is the narrow entrance to the northern extension behind the building. 2017
Colin Wilson 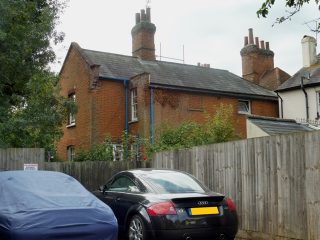 The northern extension as seen from Richmond Road. 2017
Colin Wilson 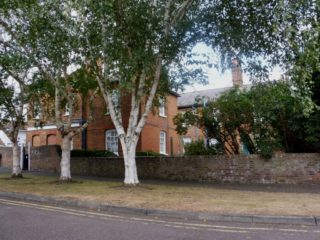 The southern extension as seen from Richmond Close. 2017 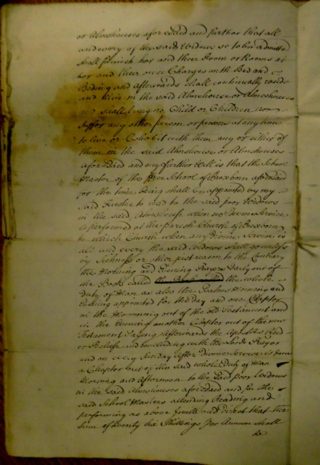 Extract from Laetitia Monson's will noting some of the requirements.
Courtesy of Hertfordshire Archives and Local Studies ref DP/24/25/9 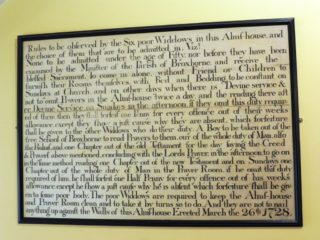 A copy of the rules board, on display at Lowewood Museum in 2017. The original is at the almshouse. 2017
Colin Wilson 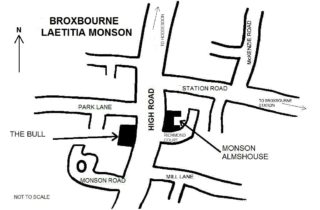 Sketch map showing the location of the almshouse.

The almshouses were founded by Dame Laetitia Monson (also spelt Lettitia, Letitia or Latitia) in 1728. This is confirmed by the inscription stone above the door and the inscription on her memorial in St Augustine’s church, Broxbourne (document appended). She died in 1734.

She was the daughter of John, Lord Poulett of Hinton St George, in Somerset and the wife of Sir William Monson (died 1726). The Monson family owned the Manor of Broxbournebury between the 16th and 18th centuries, hence she was the lady of the manor of Broxbournebury. William and Laetitia are both buried in St Augustine’s church, Broxbourne.

Laetitia Monson’s will and the Broxbourne vestry register 1688-1741 both report that the almshouse was built on the site of the Town Orchard, where the former parish almshouse was situated. An entry at the end of the Broxbourne vestry register 1688-1741 records the grant of the land. The boundaries were between 60ft and 78ft long (see the appended transcriptions).

Victoria County History notes that the almshouses ‘are contained in a plain two-storeyed building of brick, with sash-windows, and a crowning cornice of moulded brick, with an inscription and arms above the main door.’ A transcription is appended. Extensions were added to the building in the early and mid 19th century. A picture dated c1905 shows the almshouse with a wall and gate at the southern end. The building was grade II listed on 13th April 1961, the Historic England Building ID being 1100551.

Dame Laetitia Monson’s will (transcription appended) specifies the original endowment of £1000 and the way it was to be invested and managed. Essentially the capital was to be deposited at the Bank of England – a safe option.

Dame Laetitia clearly considered the finer details, such as providing for payments before probate could be granted. Her will included a clause noting she had left twenty pounds in a box so that her executor had ready money, before any other money could be released.

According to Tregelles, Dame Elizabeth Rawdon, as sole executrix for Mrs Martha Molesworth (Mouldsworth) had to make good 13 years default of a charity payment. It seems certain that this bequest was revived in Dame Laetitia Monson’s charity. Bevill Molesworth’s daughter Elizabeth was wife to Francis Lucy, younger brother of Sir Richard Lucy, owner of Broxbornebury. The relationship could account for the devotion of this property for charitable purposes.

Laetitia’s will specified the lady of Broxbournebury to act as trustee after her death.

The Charity Commission website reported in 2016 that the charitable objects were:
1: The payment of 5 shillings a year to the vicar of Broxbourne
2: The provision of almshouses for poor widows not less than fifty years of age, and of good character who have resided in the urban district of Hoddesdon for not less than two years preceding the time of appointment.

The almshouses were included in the Almshouse Association list in 2016, accounts were supplied to the Charity Commission, and the Charity was still in existence in 2018.

Laetitia Monson’s will specified that the almshouses were for the use of six poor widows from Broxbourne or Hoddesdon, with preference being given to Broxbourne widows. They had to be over 50 years of age and be members of the Church of England. The will required certain activities for the almswomen, including church attendance, regular prayers and spinning. The full details can be found in the appended transcription.

There were strict rules for the residents. The original is still (2018) in the almshouse and a copy is on display at Lowewood Museum in Hoddesdon. Top of the list was regular prayers and church attendance. The almswomen were to keep the building tidy. There were fines for non-compliance with the rules. A transcription has been appended.

A newspaper article reported on some issues in finding new tenants, with at least one room being unoccupied for 18 months.

96 year old Miss Mary Ann Day entertained her friends and fellow patients to tea on her ninety-sixth birthday. Miss Day was matron of the almshouses at Broxbourne for over forty years, and did not retire from work till she was 90. Although she is now confined to her bed at Western House in Ware, she still took an interest in affairs.

Documents at HALS record the use of part of the almshouses as the local school. and the cessation of this facility. A boy had conducted himself in a disorderly manner, upsetting the other inmates, so Mr Bosanquet and his wife (the Visitor of the Charity) decided the premises could no longer be used as a school. Another room could not be found so the teacher set up his own school. Around Christmas 1839/40 an inmate was ill so an extra room was required.

There was an internet query in 2011 from Danny Kyle of Benfleet, Essex, who was trying to find details about his Gt. Gt. Grandmother, Ann Huckle (nee Hall). In the 1891 census she was resident on the High Road, Broxbourne, but he did not know the name of the place she was living and what kind of residence it was, although there was a reference to almswomen.

History of Hoddesdon in the County of Hertfordshire, by J A Tregelles
Pages 278 and 478
Pub Stephen Austin & Sons Ltd 1908