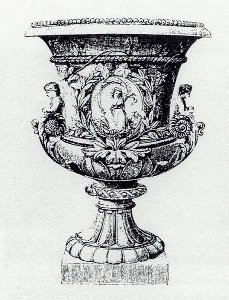 This is thought to be the Broxbourne Vase, produced by Pulham’s for the Great Exhibition of 1851.

In 1848 James Pulham senior built Pulham House in Station Road, Broxbourne. Adjoining the house were the kilns and workshops where he produced ornamental garden stone, terracotta ornaments and tiles.

In 1865, James senior was joined by his son, another James, in the business and in the 1871 census the firm is listed as employing forty men and nine boys.

“By Appointment to the Prince of Wales”

By the end of the 19th century they held a royal warrant and had begun to concentrate on garden and landscape work. The grinding wheel used at Pulham’s to pulverise claystone into powder along with the kiln have been restored by Broxbourne Council and are listed Grade II.