Ernie Wise at the opening 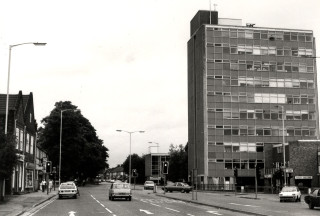 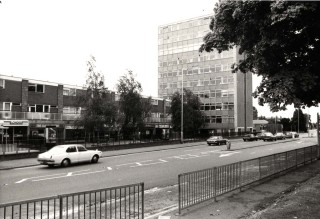 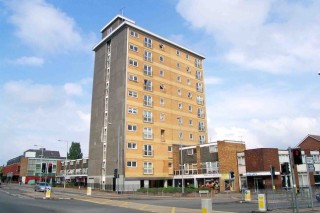 In January 1981, the one with the ‘short, fat, hairy legs’ was invited to open the new £2m office block of the holiday firms, OSL and Wings.

More than 200 people braved the snow to see Ernie cut the ribbon on the steps to the offices.  OSL were always based in Broxbourne and Wings originally came from Welwyn Garden City. The 28,000sq ft red brick building in High Road was named ‘Wings House’.

The building was started in August 1979 and was opened in November 1980.  Prior to the opening, Ernie toured the building which [at the time] was known to have the ‘most advanced electronic equipment north of the Thames’.  The company employed over 500 people and was expected to arrange over 40,000 holidays in 1981.

The Mayor of Broxbourne was full of praise for the new tower and said ‘It is a delight to see such a wonderful building in our Borough.  I would like to congratulate the architect and everyone concerned’.  However, around 20 years that view had changed dramatically.

‘The ugliest building in Broxbourne’

In the early 90s after OSL was taken over by another company, the building became dilapidated and and was considered an eyesore to most people.  Safety fears prompted councillors to allow changes to a long awaited scheme and the go-ahead was given to convert it to flats after bits of blue cladding dropped on to the street below.

Once known as the ‘ugliest building in Broxboune’, its fortunes changed as excited prospective buyers camped out all night to lay their money down on one of the forty flats.  In 1999, prices varied between £68,000 and £120,000.  Re-named ‘Ravenscroft’ and clad in yellow brick, it looks nothing like a dingy old office block from the 80s.