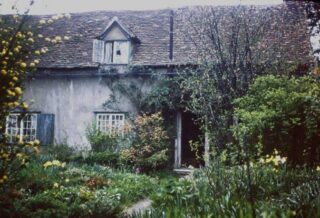 I lived in Broxbourne 1935 to 1970, but parents remained until 2004. As a child I was madly keen on local history and always on the prowl .. old buildings, Ermine Street etc.  This picture shows some very old cottages in Broxbourne.  They were in Park Lane, Broxbourne, half way up from High Road  on right side.

They were very old and occupied by two elderly ladies who worked in our house from 1935 to around the 1960s. Hard to exactly remember as I went to live abroad. I also went a little way along a ‘secret’ passage in the house facing the top of the road leading up from St Augustine’s Church to High Street – I knew the owner whom I met abroad. He reported several ‘finds’ in this house including a tiny document under floor corner in a room upstairs.