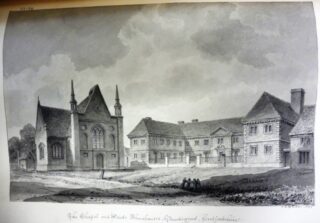 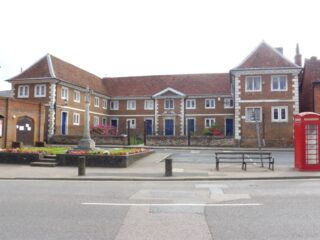 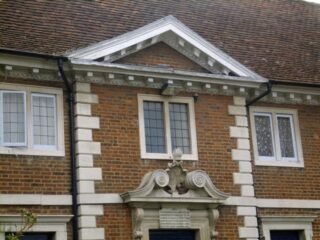 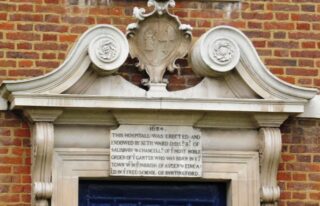 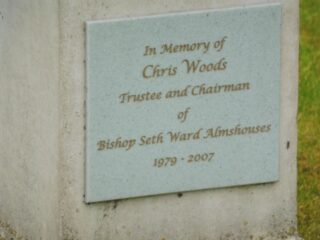 One of the memorial plaques in the garden of Ward's almshouse. Mar 2017
Colin Wilson 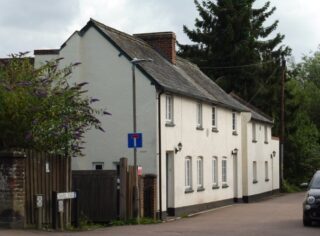 1, 3 and 5 Chapel End, Buntingford. JNote the plaque between the centre upper windows on the nearer house. Jul 2020
Colin Wilson 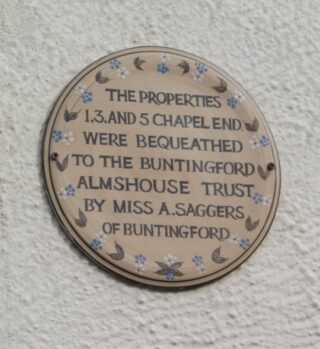 ‘The stateliest almshouses in the county’ is how Nicholas Pevsner described these almshouses. Others in the running for this accolade would be the Marlborough almshouses in St Albans and Louisa Cottages in Tring.

Seth Ward was quite eminent in his day. He was appointed as a lecturer in mathematics at Cambridge University (but may not have been able to take up the post). Not accepting the Solemn League and Covenant resulted in some loss of office, and he was staunchly anti-nonconformist. He later became professor of astronomy at Oxford, bishop of Exeter, then Salisbury, where he is buried. He was Chancellor of the Order of the Garter, though this may have ex officio, a result of being bishop of Salisbury. On top of this he was a founder member of the Royal Society.

He was born in Aspenden in 1617, one of 6 children of a lawyer who squandered his money. It seems he took after his mother, Martha Dalton, to a greater extent, and did not speak of his father. He spent his life during a turbulent period in English history, with the Civil War, the Protectorate and the restoration of the Monarchy. He died in London in early 1689, having long lost most of his faculties. Hence founding the almshouses must have been among his last acts of benevolence. The National Portrait Gallery has 3 images of Seth Ward in its collection.

The almshouses were built in 1684, possibly designed by Robert Hooke. They are sited in the middle of the town, not hidden away. There are reports of fairs and hustings being held on the green in front. Even today there are market stalls practically outside.

The beneficiaries were to be 4 men and 4 women, 2 of whom would usually be from Aspenden and 2 from Layston. Some requirements were that inmates should not have or be worth ten pounds over and above their wearing apparel and necessary household goods, and not have any yearly income or personal estate of that value. The 2020 accounts cite them as providing housing for underprivileged mature adults in Buntingford.

The accommodation, according to a 2010 advert for almspeople was a bedroom, upstairs bathroom/shower and WC, living room, kitchen and downstairs WC. Residents paid a weekly contribution charge to include heating, hot water and personal alarm. Applicants would have to be over 60 years of age, capable of looking after themselves, and able to climb a narrow staircase. At a chance meeting, a resident told me in 2017 that the dwellings on the right were upstairs or downstairs flats, while those on the left had the original spiral stairs. That would not be that easy for the elderly and frail.

As far as endowments are concerned, Chauncy records a land endowment but does not specify the value. Cussans noted that the assets realised £99 (in about 1870). In 1909 Mary Leader left £85O on trust for the Buntingford Almshouse Charity, to be invested and the income to be equally divided between the inmates weekly by the Trustees. She wanted the Charity Commissioners to be informed if this was not carried out. 1, 3 and 5 Chapel End, near the almshouses, have a plaque stating they were bequeathed to the Buntingford Almshouse Trust by Miss Sagger. The 2020 accounts show the finances to be in good shape, allowing provision for the future.

The original orders and constitution date from 1684, being drawn up by Seth Ward. They were modified in 1910, 1917 and 2016. Originally there were 7 trustees. The remaining trustees had to appoint new members when 3 had died. In 2020 nine trustees were listed.

Some newspaper articles throw some light on how residents cared for each other. It is a mixture of support and trauma.

Fanny Bardell, an old widow woman and an inmate of one Seth Ward’s almshouses, was found dead in her bed on a Tuesday morning in 1843. Verdict: died by the visitation of God.

Eliza Burrows died at the age of 77. The following information came out at her inquest. Martha Harradine, her sister had been living with her for some months to assist her until the previous week. 94 year old widow Esther Trussell was the last to see her alive about 5pm on 24th. She was then going to bed and appeared to be as well as usual. The following day Mary Miles was told something so went to the house but could not get in. She knew Esther left her bedroom window unfastened so she could let her door key down if she needed help. Hence Mr Aylott, who lived opposite, was called. He used a ladder to gain entry. Finding Esther dead, he then let the other women in. Eliza had been ill for a few months. Dr Cocks attributed the death to serous effusion of the brain (some sort of haemorrhage?). It is interesting that no-one had access to the dwellings, as would be the case with a warden nowadays. Also note Esther’s age of 94.

Mary Aylott also died at the age of 77 but her demise was traumatic.  At the inquest, Mary Miles said: I had charge of the deceased. I slept with her at night but generally left in the day for other duties. She was very infirm and did not at all times know what she was about. …. I left deceased about 11 o’clock and called in another house. I had not been in long before someone tried the door. The occupant unfastened the door and then I saw the deceased with her dress all on fire. She soon fell down and we did our best to extinguish the fire. I attended to her up to her death [on Wednesday, 2 days later].

There are other details from the newspapers. In 1897 the Parish Council felt they should have 2 delegates on the almshouse management. At various times there were gifts and teas laid on for the residents. An 1882 enquiry into Rev Butt’s behaviour included information that he was treasurer for the Savings Bank and sometimes visited The George Hotel on a Saturday to cash a cheque for payment to the almshouses.

Nowadays the buildings are listed II* by Historic England. The Bishop Seth Ward Almshouses Trust is registered with the Charity Commission, and affiliated to the Almshouse Association.

The Victoria County History of the County of Hertford, ed William Page
Note: Buntingford does not have its own entry, as it comprised 4 parishes. St Peter’s Church next to the almshouses was a chapel of ease. Buntingford became a parish in 1900. See articles about Aspenden and Layston.
Vol 4 pp18, 79 and 88
Issued Archibald Constable & Co. 1914. Reprint by Dawsons of Pall Mall 1971 ISBN 0 7129 0478 6
This publication is available online at https://www.british-history.ac.uk/vch/herts/vol4

The Buildings of England: Hertfordshire , by N Pevsner and B Cherry
Pages 117-8
1977

https://mathshistory.st-andrews.ac.uk/Biographies/Ward has an extended biography, and includes a portrait of Seth

https://www.npg.org.uk/collections/search/person-list.php?search=sas&firstRun=true&sText=seth+ward has 3 images of Seth Ward

https://www.tripmondo.com/united-kingdom/england/hertfordshire/meesden/ mentions use as a town hospital

Newspapers. These can be viewed on-line at https://www.britishnewspaperarchive.co.uk/